How to dismiss an unlawful sheriff - Brendan Facey?

There is a bit of action brewing in the colony of Victoria, Australia regarding a particular (natural?) person that goes by the name of Brendan Facey (see illustration below), which according to some paperwork is (allegedly?) the Sheriff of Victoria.

You won't read about it on news.com.au or even a Fairfax Media publication.

The camera crews of Today Tonight or A Current Affair will not be chasing this fraudster, that's for sure! 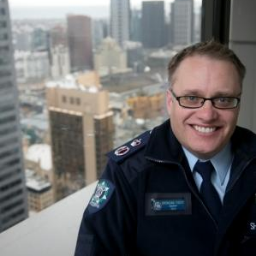 It’s not a matter of ‘conspiracy theories’ or even ‘facebook law degree’ information, it’s just  plain and simple following the ‘legal’ procedure, irrespective of how lawful it is.

As of this time it is in the public domain that there is no lawful appointment for the so called sheriff of Victoria, Brendan Facey.

Consequently if his appointment is not lawful then neither is the appointment of his ‘deputies’.

Now, this does not stop the ’government’ from acting further upon his actions.

Some people may comprehend the term ‘statute barred’, where the sheriff will try to obtain funds where the ‘warrants’ have expired.

That is actually a crime called:


Get the name of the ‘sheriff’ or ‘deputy’ in order to charge them.

Now at this point in time one should know that the sheriff is an officer of the Supreme Court of Victoria, exclusively.

He is not, he's also a director of IMES (Infringement Management Enforcement Services).

The sheriff’s appointment MUST be gazetted, where in the case of Brendan Facey it is not.

Now this is where it gets really basic.

VIII. The Governor may constitute and appoint, in Our name and on Our behalf, all such Judges Commissioners, Justices of the Peace and other necessary offices and Ministers of the State as may be lawfully constituted or appointed by Us.

And it gets a little bit better for the lay person.

X. The Governor may, so far as We Ourselves lawfully may, upon sufficient cause to him appearing, remove from his office, or suspend from the exercise of the same, any person exercising any office or place under the State, under or by virtue of any Commission or Warrant granted, or which may be granted, by Us, in Our name, or under Our authority.

Now, there is a mistake that many people make when reading law texts of yesteryear.

In this case the word ‘may’ in 1901 means ‘will’ in respect to carrying out that action.

Write a letter to the current governor, via the appropriate method outlined, to remove Facey from office.

Everyone who has been effected must take action.

Some people may not have access to Google Drive, so this is the reference from the State Library of Victoria's archive.

Thanks for that Phillip.

Edited the original post with a reference to the source Government Gazette.

Your wish has been granted!