Thousands of Victorians go to court over unlawful 'fines'

More and more Victorians are waking up to the fact that parking and traffic fines are unlawful.


the general populous are waking up to this scam which is perpetuated by Victoria Police, as a  result, challenging the unlawful fines in court.

The (alleged) offence starts out as an "Infringement Notice - to The Operator" from Victoria Police, and this is where the fraud begins. See illustration below: 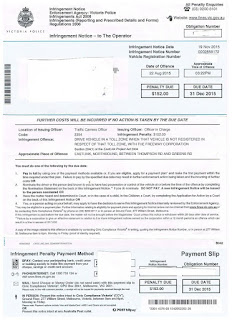 If no action is taken is culminated with actions from Victoria's unlawfully appointed sheriff - Brendan Facey, where he gets his alleged authority from that being the Sheriff Act 2009, which is also unlawfully put into action.

Please Note: just because the information is available on the internet via various social netoworks, the corporation conglomerate (read government) is not going to say "oh, you busted us... okay okay, we'll stop".

They WILL continue to defraud the masses hundreds of millions annually and as a result:

In reality every single fine a motorists receives must be challenged in a place of business/trading/commerce called an 'administrative court'.

Could it be because of social media, and the ability to share information instantaneously?

Could it be because of the various websites that provide information based on 'their' (the government's) actual and current laws, irrespective of how valid they really are?


No doubt the people who disseminate this information, to help the victims of fraud in court, should be commended for their efforts for exposing 'criminal' actions of the authorities, but it would be very doubtful that they would be awarded Australian of the Year let alone Victorian on the Year.

At least this year 72,900 motorists have woken up AND decided to take action.

See the following article from 31 December 2015 by the Herald Sun publication of the headline:

Fight for our money.

Please note that we have notified many reporters of this fraud and to date not one of them has shown up in the courtroom in order to print the story in their boss's newspaper publication.