Before you donate to the Salvation Army

Currently on Australian television there is a lot of advertising time devoted to the Salvation Army's Red Shield appeal.

When one is involved in the finance industry one would also be aware of the name Rothschild, which (apparently) originated from a Jewish family living in Germany in the 16th Century that changed it's name to Rothschild (from the German translation Rot - Red, schild - Shield) after the coat of arms emblem that appeared over their house.

The Rothschild name rose to fame from Mayer Amschel who started the namesake banking dynasty. 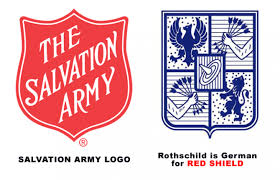 There are a fair few dodgy deals done to secure the wealth of the Rotschilds, according to pop culture / historians.

One other aspect of charities (that the masses may not be aware of), in Australia is that they are a tax haven, with (deliberately?) less than accurate book keeping, where the Australian government has taken zero action against these companies.

Charities can easily spend 85% of taxpayers monies on 'administration' before even 'one red cent' makes to the actual recipients.

High CEO wages, company cars, 'money for mates' dodgy deals are all part of a normal business day without any government intervention whatsoever.

Why would a honest [people in] government take no action, unless maybe it (they) was also involved in this 'scam'.

What makes matter worse is that the Salvation Army was (and still is?) involved in sexual abuse against children.

Would you really want to give your hard earned cash to a company involved in child sexual abuse, that survives very well from government funds, where only the 'beneficiaries' receive a small portion ?