The is is the sort of scum that can be found in the Victorian police force.

He should have never been released. 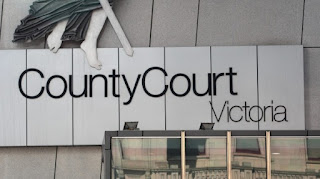 
One of Victoria's worst sexual predators – a former policeman who raped children for more than a decade – has been handed one of the state's longest sentences for sexual offences.

The man, 66, was on Tuesday sentenced to serve 19 years in jail (with a 15-year non-parole period) for abhorrent crimes against children aged 10 and younger.

This, combined with a previous sentence imposed for similar crimes committed in New South Wales, means he will be at least 85 before he is released.

The man's youngest victim was just five years old when he first raped her.

Three of the man's victims on Tuesday said they wanted his name made public, saying they believed more victims could come forward if they knew he was behind bars. But Fairfax Media is unable to name the paedophile due to a request from the County Court.

The man was a police officer between 1967 and 1979, when he resigned from the force after the mother of one of his victims reported the abuse to his colleagues.

On Tuesday, County Court Judge John Carmody said the day after the woman reported the abuse, "a number of police" came to the family home and questioned the boy about what had happened.

While the woman said she didn't want to take the matter any further, the officers told her that the man"wouldn't be in the police force any more and would be moved away".

The court was told on Friday that after Victoria Police failed to act on the complaint, the man went on to sexually assault and rape children for at least another four years.

He formally pleaded guilty on Friday to 18 offences against nine victims.

"The offending in this case is of the most serious nature," Judge Carmody said.

"You were in breach of trust in relation to all the complainants."

This, he said, was aggravated by the fact the man was a local policeman when he brutalised the children, who were all aged between five and 10 when he first began to abuse them.

On Friday, Crown Prosecutor Nanette Rogers told the court that the police officer had asked one boy, who was between six and 10 when he was raped, whether he wanted to see the police station.

When the boy said yes, the officer took the boy to a room in the station where there was a bed, and raped him.

Dr Rogers said in another episode, a girl went to the police station for help after losing her mother at a nearby festival.

After telling the child, "I'll look after you", the officer took her into the back of a police divisional van and forced her to perform oral sex on him.

In harrowing testimony one of the victims, now 45, told the man she hoped he rotted in hell for what he had done to her, including holding a police-issue revolver to her head as he raped her.

She wept as she described how she had hoped he would pull the trigger and put her out of her misery.
Instead, he forced her to suffer through years of "hell and his sick games".

Judge Carmody said that by pleading guilty to the offences, the man had "demonstrated some limited remorse" for his actions.

But, Judge Carmody said, he was concerned by a pre-sentence report that described the man as being at high risk of re-offending.

He was also concerned that the man had a "simplistic and under-developed" understanding of the impact of his offending on his victims; one of whom had tried to take his own life three times after suffering a lifetime of trauma from his childhood abuse.

"Your prospects of rehabilitation are, in my opinion, low," Judge Carmody said.

This, he said, was aggravated by the fact that the former officer  did not use any protection when he raped the children, exposing them to the risk of sexually-transmitted disease.

For those offences he was sentenced to 17 years, with a non-parole period of 12 years.

When the two sentences are combined, and taking into account time served, he will serve a total 26 years, with a non-parole period of 19 years, for all the offences.

The man did not react as he was led away.

Outside court, one of his victims told Fairfax that "justice is served".

"I'm glad to see that justice is served, but I'm just relieved that it's all done," she said. "It's been a long time coming."
Posted by AuCorp at 11:34 PM