Australia's politicians the most dishonest in the world?

It should be no secret to the Australian people that the people in power are colonialists.

It should also be no secret that Australia's police force was formed from criminals, where many people on social media have proof that the police are still a criminal entity today.

Well what about our so called elected representatives of the people, you know politicians, MPs etc.

Are they people of high moral values, respected members of the community or just the dregs of society dressed up in business suits.

It seems like the lot of them are 'social security' (you know, tax payer's money) cheats, defrauding the general population.

When they get caught they claim an 'error of judgement', no government sanctions, no criminal charges and still a cushy job and an over-inflated tax payer funded pension.

Imagine if a member of the herd population got caught by Centrelink, would they accept an 'error of judgement' as an excuse?

Do the people really support politicians defrauding them of their tax dollars?

Telmo Languiller, just another thief, another mutt in office.

Just another 'money for mates' deal, where scum like this who defraud the Australian population go unpunished.

It's almost telling others that they can get away unpunished even if they do get caught.

Try not paying your unlawful road toll fine and you WILL end up in prison.

It looks like this country is STILL run by criminals. 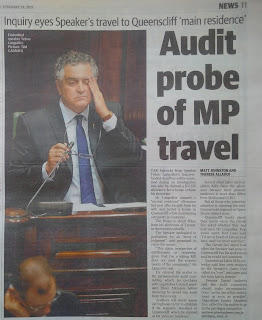