Queensland the terrorist capital of the world or the lawless wild wild west?

Everyone should know that the corporate body called the 'government' does not take an action without a business case justifying this action, where it usually boils down to the dollars / profit justifying that action. 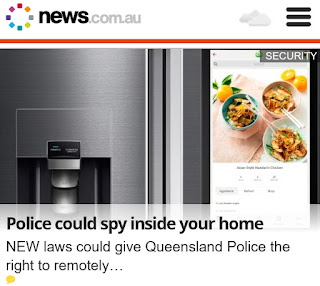 Apparently now in Queensland, there has been put forward the notion to surveil the general population of Queensland in an alleged attempt to thwart 'terrorism'.

So is the land of the 'Queen' (which one?) full of terrorists in order to justify such as law?

Naaaaaaahhhhhhh, we don't think so...

Unless you call 'sovereign citizens' traveling and not driving, without number plates or licences, 'terrorists'?

Let's take a closer look at the definition of 'terrorism' 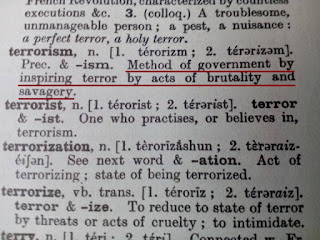 The above illustration states:

" terrorism, Method of government by inspiring terror by acts of brutality and savagery".

Let's take a very very brief look at this convoluted process which makes something called a law.

In order for a 'law' (pieces of paper called a 'Bill' to became pieces of paper called an 'Act') to become lawfully enacted, the Bill must be approved by an upper house (term no longer used, where it's called the Senate and the Legislative Council) and a lower house (another medieval term, which is replaced by the Legislative Assembly), as mandated in a document called the Commonwealth of Australia Constitution Act (or the 'Constitution' for short).

Now, in Queensland there is a 'problem' as the Legislative Council (nee upper house) has been abolished by a 'law' called the Constitution Amendment Act 1921.

Was this Act lawfully enacted?

Well of course it wasn't, silly! But we won't let technicalities like this get in the way of enslaving the terrorists of Queensland even more.

The 'Australia Government' is forcing pushing enticing people to use smartphones for communications purposes, so that they can be monitored easier.

But that's just a 'conspiracy theory' and ANY constitutional lawyer will tell you that all is ok in the law making process in Queensland.

STILL not convinced the 'people' are the enemy of the government?