Police above scrutiny and the law?

Too many people are aware of the corruption of Australia's police force. 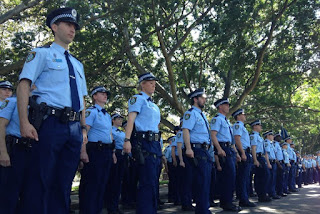 People who have been on the receiving end of the stick should know that seeking 'justice*' against police is a process where a remedy (if any is allowed by the country's court system) could take up to 20 years to achieve, as in the case of Corinna Horvath against Victoria Police.

Conversely the police could achieve a 'remedy' against you (the accused) within a year.

Horvath's case had to be taken outside the jurisdiction of Australian law to obtain some sort of closure.

The fundamental principles of Australian law dictate that every person has the right to natural justice or something called the due process of law.

As time goes forward some people are aware that these fundamental principles are being eroded by lawmakers both at federal and state levels.

The three tiers of government ; the Executive, Parliament and the Judiciary are supposed to be independent bodies without any influence on one another where all the checks and balances are made in order to sustain a so called democracy.

It seems that the people in parliament are making laws, conspiring against the mass population, taking away their ability to seek a remedy at law if harm has come to them in the hands of the 'authorities'.


If one cannot take a person who may have caused them harm to a court of law for a decision to be made on the accusation, then one's fundamental legal rights have been taken away from them, making the system they live in not a democracy but rather a dictatorship, police state, penal colony or whatever else someone may decide to call it.

The New South Wales lawmakers have now enshrined it in law that the police minister is above the law, as described in the Terrorism (Police Powers) Act 2002 under Section 13;


13 Authorisation not open to challenge
(1) An authorisation (and any decision of the Police Minister under this Division with respect to the authorisation) may not be challenged, reviewed, quashed or called into question on any grounds whatsoever before any court, tribunal, body or person in any legal proceedings, or restrained, removed or otherwise affected by proceedings in the nature of prohibition or mandamus.
(2) For the purposes of subsection (1), "legal proceedings" includes an investigation into police or other conduct under any Act (other than the Law Enforcement Conduct Commission Act 2016).

From this action it is clearly evident that the two tiers of government; the parliament and the judiciary, are conspiring against the residents of the colony called Australia, in taking away every last bit of (alleged) rights the people may think they have.

Though some people will tell you that the people (meaning serfs) have the utmost supreme authority (over parliament), as granted by the Constitution, where the serfs have done nothing to exercise their apparent 'authority' in the last 116 years and it is doubtful they will in the near foreseeable future.


This law has been in force for 15 years.
If the people really wanted to do something about this they would have.

It seems that the people (serfs) deserve the slavery they so need / desire.

STILL not convinced you're criminal in this colony?