Government falsifying laws by removing the Crown from Acts?

Have you been dudded by the people in the federal or state government with an unlawfully enacted law?

Has your person as a result suffered (financial) harm, which you can quantify?

Our attention has been drawn to this topic with information obtained yesterday concerning the  actions of the people within the Queensland government with regards to the removal of an important section within a law (in particular the example used was the Transport Operations (Road Use Management) Act 1995) namely section 2 that states:

Researchers have noticed that Queensland's current Transport Operations (Road Use Management) Act 1995 the second section of Part / Chapter 1 is missing, where in an earlier version it was there. 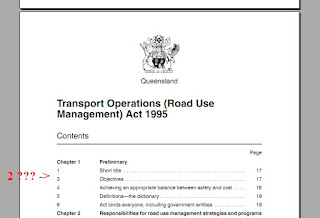 There are many more other aspects that make up a lawfully enacted Act, but in order to keep this post as short as possible, attention was drawn to this topic only.

Of course this also applies to your state laws as well as laws of the Commonwealth.

See if any Acts used against your person also do not have this section.

Are the people in government acting beyond their lawful capacity?

In most Q'ld. Acts, Section 2 is 'Commencement', (usually Date to be proclaimed), this causes questions as to whether an un-proclaimed Act is in force. The first example given does not appear to be from the "T.O.(R.U.M.). The earliest copy I have on file is dated 1 Sept. 2012 and Section 2 is already missing. regards, D