Proof that council rates are illegal? 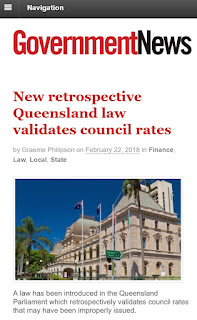 A law has been introduced in the Queensland Parliament which retrospectively validates council rates that may have been improperly issued.

The new Local Government Legislation (Validation of Rates and Charges) Amendment Bill 2018 has been formulated as a response to a Queensland Supreme Court ruling in November 2017. That ruling, known as the Linville case, meant that many rates and charges levied local government authorities in Queensland in recent years could be found to be invalid.

The case came to court when investment company Linville Holdings was taken to court by Fraser Coast Regional Council for unpaid rates. Linville argued that the rates were invalid because the council had failed to pass separate resolutions each year validating its rates and charges.

Linville won the case. The ruling, from Supreme Court Justice David Jackson, called into question the validity of many separate rates and charges levied by councils all over Queensland. Brisbane paper The Courier-Mail at the time identified Gold Coast, Brisbane, Sunshine Coast, Moreton Bay, Townsville and Cairns as councils that had similarly failed to pass separate resolutions during annual budget meetings, and that potentially all Queensland councils could be affected.

The Queensland Government acted very quickly to enact new legislation which would effectively invalidate the court’s ruling. They new bill will pass quickly into law – Queensland is the only state in Australia with no upper house of Parliament.

The Bill’s Explanatory Notes explain in detail what the Government believes to be the rationale for the legislation, and contains a justification for retrospectivity, basically “the need to provide financial surety to local governments and ratepayers.”

Brent Lillywhite and Samuel Volling from legal firm Corrs Chamber Westgarth have written an overview of the legislation. They say that it was introduced because the Queensland Government recognised the potentially serious implications of the Linville ruling.

“The Bill would insert new sections into the Local Government Act and the City of Brisbane Act with the effect, in summary, that any rate or charge levied (and anything done in relation to the rate or charge e.g. steps to recover the charge) for a financial year up to and including the year ending 30 June 2018 is not invalidated merely because of a failure to make a specific resolution for the rate or charge.

“In so doing, the Bill would retrospectively validate rates or charges that, in light of the Linville case, would otherwise be invalid.”

But they say councils should still be wary.

“The Bill would only apply to rates or charges up to and including the financial year ending 30 June 2018. For future financial years, local governments will need to make specific resolutions levying rates and charges, in line with the Supreme Court’s approach in Linville.

“Second, the Bill would only validate rates or charges that were invalid solely because of the failure to make a specific resolution. If a rate or charge would have also been invalid for another reason, the Bill will not validate it.”

See the legislation;
Local Government Legislation (Validation of Rates and Charges) Amendment Bill 2018 contained within the pdf below;


Now the real question could be that of the lawfulness of retrospective laws.

so do we send an invoice for a refund to our local council? They are still invalid due to the REAL Commonwealth of Australia Constitution. Am I right?