Parking, one law for us another for them? 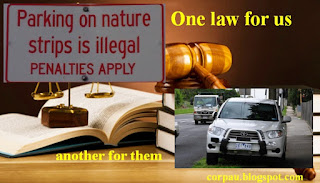 If you're an Australian driver / traveler / person in charge of vehicle, you should be aware that parking your horseless carriage on the nature strip is illegal.

This message is supported by the 'no-tier'* of government, businesses called city councils.

An excerpt from a Victorian city council's website states how dangerous it is to park your soon to be self driving vehicle on a nature strip, as shown in illustration below: 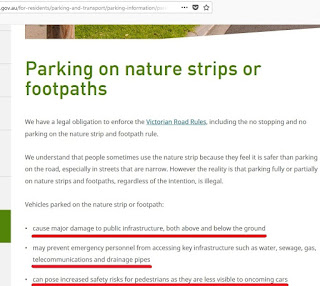 The city council states that:

Vehicles parked on the nature strip or footpath:

So does this 'law' apply to the 'authorities' or rather private 'persons' contracted out in vehicles to survey road user's speed only to unlawfully fine them from traveling above a posted speed limit sign?

The short answer is of course not.

In layman's terms, the books have been 'cooked' or the law has been 'rigged' so that the authorities or rather persons unlawfully engaged in issuing fines are allowed to damage infrastructure.

If you have been issued an unlawful fine for allegedly traveling above a posted speed limit, we suggest it to be contested in the administrative courts in your state.

* - government 'advertising' states that 'local government' or city councils are the third tier of government, which is false.