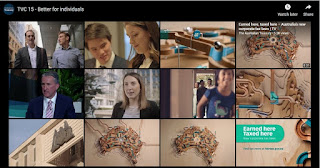 People should be aware that the medium we call television is an advertising medium, where the messages in between 'programming' are messages to entice you (the 'consumer') to commit to a purchase.

When Australia's federal or state governments resort to television advertisements your instinct should tell you that the products are dodgy.

Not too long ago, a huge advertising campaign that was put on Australian television, was one that asked people to conduct a business transaction with the Australian Bureau of Statistics in providing that business with your private and personal data, where what you were not told about was that the data you provided previously was sold for $41 million by the ABS.

With the government controlled communications medium we now call the internet succumbing to commercialisation and with the advent of 'social media', everyday people (whatever that means), the average Joe or the serfs are now able to publish content in a raw and unedited format which may have previously been stopped by the manipulators of society called media moguls in order to suppress the truth that may not have been so flattering for governments.

The video of the title Collateral Murder by Wikileaks is just one example of exposing government corruption, with this instance being on the war in Iraq, where also Google was trying to cover up this video on Youtube, by modifying its search logarithm so that users could not find it.

Social media platforms have helped spread information (let's put misinformation aside for now), where people would go further than the mainstream media, by supplying documentation which shows, proves or alleges misbehaviour or corruption or criminal activity by persons in various government departments.

With regards to taxation in Australia, there are many references by the mainstream media and persons on social media that point to corporations paying zero or minuscule amounts of tax, operating in tax havens which are supported by those in governments, and even blatantly practicing tax avoidance procedures.

So in order to dumb down the general population, the Australian government has gone on a 'spending spree' to tell the herd population that all is well and only now (from 2018) they're going to implement a 'fairer' tax system, which states that 95% of Australians will pay less income tax under the changes made in 2018.

Companies have been around for quite some time, (e.g. East India Company, 1600) and they've been screwing people over since their inception, where this could be difficult for the average Joe to comprehend, but that is an entirely different topic no doubt worth a few volumes.

MANY multinationals, the likes of Apple, Facebook, Google and Microsoft (and that's just in the IT sector)  have been screwing the hard working Aussie 'mums and dads' of their tax dollars, as they are the ones who have to make up the deficiency, where only now that Australian Government has implemented a 'fairer' tax system.

Broadly speaking with regards to the law and economics, you can be certain for sure that as time goes on, the Australian Government does very little to be 'fairer' to the Australian people.

In economic terms your Australian dollar is losing value every single year, and the so called great Australian 'dream' of owning your home is becoming more distant every year from becoming a reality.

Austerity has been hitting the Australian people harder since World War II, but too many are asleep or ignorant to notice this, where this is compounded by the Australian Government sending out false messages over the years culminating in the pinnacle of false information in television commercials regarding a 'fairer' tax system.

Remember the Australian Government hid the truth from you (the constituents) regarding the secret talks between Whitlam and the U.K. Monarch.

Are those the actions of an honest government?
Posted by AuCorp at 9:03 AM