It can be difficult to obtain factual information with regards to many topics, where currently people's privacy, with regards to smartphone use should be a huge topic of concern for EVERY user.

The Electronic Frontier Foundation is just one organisation that provides information about digital privacy, free speech and legal aspects of privacy being US centric.

Now whether people have (factually) had enough or there are agent provocateurs in relation to organised protests, the use of smartphones during these activities could be to your detriment.

A piece of advice given to safeguard your privacy, when attending a protest is to:
".. take a screenshot of the photo on your mobile device to remove the metadata.."

We know for a fact that the above suggestion may not hide your metadata, as described in the above article, where the amount of data given is dependent on the operating system and its version also depending on the smartphone manufacturer's decision to include whatever data they choose within the operating system's interface which is in charge of the screenshot data.

In this experiment we took a photo which was then screen captured, were only a portion of that screen capture is published as seen in the attachment below: 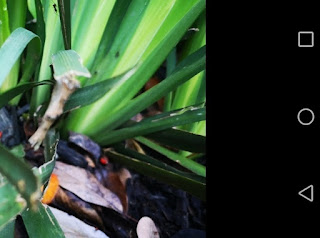 The metadata contained from this screen capture above contains the following identifying fields which have been blacked out: 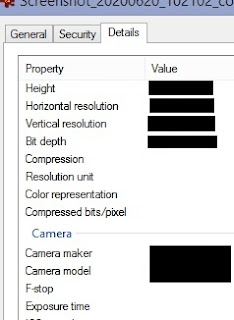 Remembering that ALL metadata is used to identify you/your device, the more concerning pieces of information in this screen capture are the Camera maker and Camera model, which have been blacked out for the poster's privacy.

So, it is still not a good idea to post a screen capture of a picture to upload to social media without actually stripping the EXIF data first.

There are smartphone apps available for this purpose.

"Remembering that ALL metadata is used to identify you/your device, the more concerning pieces of information in this screen capture are the Camera maker and Camera model, which have been blacked out for the poster's privacy."
WTF.