Facebook, Palantir using AI from the data you feed it against you 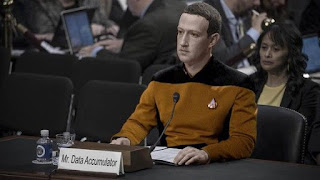 (Illustration: Mark Datazuckerberg, a blend of the character Data from Star Trek, and Mark Zuckerberg)

Zuckerberg claims no knowledge of Palantir's involvement with the Facebook, Cambridge Analytica scandal, was the headline of a couple of years ago.

How can you trust someone with lies of this calibre?

Well billions of people worldwide do.

Next thing they’ll tell you that Whatsapp (or Messenger) is ‘secure’ or ‘private’ when it comes to communications.

Well guess what, it’s not!

A better solution would be to use an open source program, which has been peer reviewed by security experts (not by tech dweebs on YouTube) and given the thumbs up.

An even better program would be one that does not require an identity hook, like your phone number of email address, but that’s a whole different topic for another time.

Facebook should be called Facecrook base on its actions, where the pictures you upload of all your family members end up global databases where people who did not ask to be tracked or maybe even consent to their photo being put on Facecrook have now been catalogued.

We’ve seen people upload ALL their family snaps from an occasion/celebration onto ‘social media’.

Haven’t the ‘public’ been tortured enough with (say) 40 of your photos, from almost  every angle of your retarded relatives?

What, you want to ‘show off’ how great your existence is, where in reality it’s a farce you’re portraying on social media?

Facecrook not only scans text before it’s posted on the advertising medium, but also uses AI to scan screen captures or photos to identify objects that it considers inappropriate, especially in relation to political campaigns or the virus situation, or independent articles from the mainstream media’s directive, where the US company is basically throwing the First Amendment under a bus.

Facecrook also acts illegally in Australia, where the government boffins have not picked this up, raising the question of how much the Australian tax payers are paying for this incompetence, but again that is another topic for another time.

Facecrook also uses slave labour from countries like India, with full support of the governments concerned.

It seems that people will never learn, where it truly shows that they love all forms of slavery that they’re in.