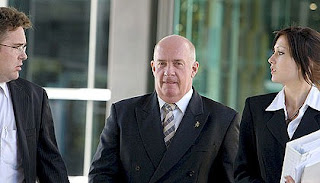 The businessman who testified he paid kickbacks to jailed former Queensland cabinet minister Gordon Nuttall is still on the state government's payroll.

A Brisbane jury found Nuttall, 57, guilty of official corruption and perjury in the District Court on Wednesday.

It's the second time Nuttall, 57, has been found guilty of receiving kickbacks.

He is currently serving seven years for taking secret commissions.

The crown alleged in the latest trial that between October 1998 and April 2006, Nuttall corruptly received $150,000 in payments while he was the minister for industrial relations and health, from his friend, businessman and former plumber Brendan McKennariey.

It was alleged that in return for the payments, Nuttall used his ministerial influence to help Mr McKennariey win government contracts.

Mr McKennariey has indemnity from prosecution because he gave evidence at the trial.

But the fallout from the case continues, with revelations Mr McKennariey's company GBG Project Management Services has a state government contract worth $30,000 for a sewerage system at Greenbank state school.

He also has a contract with Redland City Council for a waste water project worth almost $800,000.

Premier Anna Bligh's spokesman said the government contract with Mr McKennariey's company was awarded in 2006 and expires in four months.

Redland City Council chief executive Gary Stevenson said the council will examine its contract, which was signed off in August.

"Until recent media reports we were not aware at all of the association with Gordon Nuttall," he told ABC radio.

"Council would obviously need to ensure that its contract with the company is properly established and fulfilled.

On Thursday in parliament, the opposition questioned Premier Anna Bligh on whether her ministers had any other dealings with Mr McKennariey.

Ms Bligh distanced herself from the former minister, saying he tricked her and his cabinet colleagues, who had no idea of his dishonest conduct.

"This entire saga has come to pass because this was secret, it was covert, it was covered up by everybody involved in it," she said.

"So did I know about it? No I did not and ... I am sickened and appalled that as people sat around our cabinet table believing they were sitting with someone genuine, they were being so deceived."

"The stench of corruption surrounds this Labor government," he told reporters in Toowoomba on Friday.

This is how the government deals with criminals within its own ranks, clearly showing that the SAME law is applied differently to its own than to the masses.

You are untouchable if you are part of the boys club, and have support from within.

This is a deliberate failure of the criminal justice system.