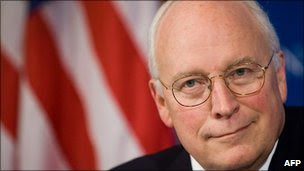 Nigeria's anti-corruption agency is to charge former US Vice-President Dick Cheney over a bribery scandal that involves a former subsidiary of energy firm Halliburton.

A lawyer for Mr Cheney said allegations he was involved in the scandal were "entirely baseless".

A spokesman for the anti-corruption agency, Femi Babafemi, said the charges were likely to be brought against Mr Cheney next week.

Mr Babafemi said the charges were "not unconnected to his role as the chief executive of Halliburton".

But Nigeria, along with France and Switzerland, has conducted its own investigations into the case.

Mr Cheney's lawyer, Terence O'Donnell, said US investigators had "found no suggestion of any impropriety by Dick Cheney in his role of CEO of Halliburton".

"Any suggestion of misconduct on his part, made now, years later, is entirely baseless," Mr O'Donnell said.

The bribes concerned the construction of a liquefied natural gas (LNG) plant in southern Nigeria.

Halliburton denies involvement in the allegations.

It has complained that a raid on its office last week by Economic and Financial Crimes Commission officials was "an affront against justice".

Ten people were detained for questioning and later released.

A prosecutor quoted by the Agence France-Presse news agency said those charged would include former and current leaders of Halliburton and officials from firms in a consortium involved in the LNG plant.

Nigeria is a member of the oil cartel Opec and is one of the world's biggest oil exporters.

Corrupt business dealings and corporate crime a (illegal) 'normality' at the top end of business / politics.

If and when these deals come out the real repercussions are muffled by the politicians and people involved, and generally the punishment, is not served.

Politicians then hide the fact of the allegations, by drawing attention that the information obtained, if from leaked document is 'illegal'.