Welcome to a new age of whistle-blowing 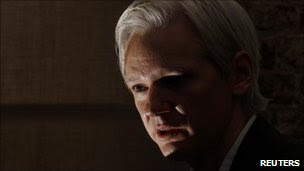 They have been denounced as "a criminal act" and hailed as the future of investigative journalism in equal measure.

But the question is: how did the Wikileaks disclosure of US military documents come about?

More than 90,000 documents, dated between 2004 and 2009, on the war in Afghanistan, have been released, but the whistle-blowing website will not disclose the identity of any of its sources.

In the aftermath of one of the biggest leaks in US military history, the US government will surely not be the only one wondering how this happened. 'Mishandling information'

After scrutiny by the Wikileaks website, the site gave access to the documents to three newspapers - the New York Times, Der Spiegel and the Guardian - ahead of public release.

As the media rushed to publish the story, the press were soon asking who might be behind such a huge leak - if, indeed, it was one person at all.

The Pentagon has already launched an investigation.

Wikileaks, which has a policy of protecting its sources, has not given any detail as to how many sources it received the documents from, or when it received them.

Media speculation has so far focused on 22-year-old Bradley Manning, an army intelligence analyst who is accused of mishandling and leaking classified information. 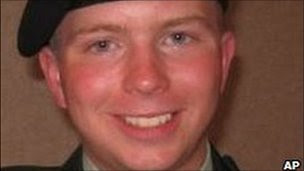 US Private Bradley Manning is being detained in Kuwait

Specialist Manning, reportedly known by his screen name bradass87, was charged on Monday with eight violations of US criminal law and four violations of army regulations.

These include the leaking of a 2007 video of a deadly American helicopter attack in Baghdad.

Spc Manning is currently being held in pre-trial detention in Kuwait after being arrested while working in Iraq.

He is alleged to have released files kept contained on the Department of Defence's Secret Internet Protocol System (SIPR).

But Wikileaks founder Julian Assange says that there was "no allegation, as far as we can determine, that this material is connected to Spc Manning."

In any case, did he alone leak the sheer volume of records that has been released? If not, then will it even be possible to find out who did?

With technological advances - the internet, and cryptography - the risks of conveying important information can be lowered”

But it is not about who has done it, but how, that is most important here. The true perpetrator of aiding the disclosure of confidential files is technology itself.

Such an initiative would have been far harder if at all possible - and more dangerous - 20 years ago.

As the Wikileaks website says itself, "with technological advances - the internet, and cryptography - the risks of conveying important information can be lowered".

The site, born in December 2006, now boasts more than a million documents.

Described on one blog as the "first stateless news organisation", Wikileaks has servers in countries which include Sweden and Belgium, where it benefits from press secrecy laws.

The idea behind the site is the need for transparency, with the basis being that it allows anyone to upload content, which will then be looked at by a group of volunteers, all journalists, who decide what to publish.

On submission of a document, which is encrypted, Wikileaks promises to prevent it being "technically traceable to your PDF printing program, your word installation, scanner, printer" and to make the contributor anonymous from an early stage. 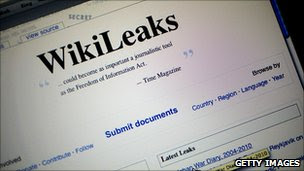 Wikileaks says it makes contributors anonymous from an early stage

The release underscores the significance of technology to the future of journalism and transparency - and signifies a considerable shift between authorities and whistle-blowing.

By teaming up with national papers, the documents were able to reach a wider audience.

Unsurprisingly, though, the site has drawn its detractors - including those who would prefer it did not exist.

On the website, a leaked document, purportedly by the US army counterintelligence centre, looks into the threat posed by Wikileaks to national security - and how to marginalise it.

"The identification, exposure, termination of employment, criminal prosecution, legal action against current or former insiders, leakers, or whistle-blowers could potentially damage or destroy [the website's] center of gravity and deter others considering similar actions from using the Wikileaks.org Web site," the document reads.

We have files that concern every country in the world with a population of over one million people, including the United States”

If anything, this only proves that Wikileaks is succeeding at causing waves.

James Lewis, a cybersecurity expert at the Center for Strategic and International Studies, says the disclosure on the Afghan war was reminiscent of the 1971 leak of Pentagon files about the Vietnam war.

But - as opposed to the so-called "Pentagon Papers" - which were handed in hard copy to a journalist, "now you can take even more documents and give them to the whole world", he told AFP.

There are always going to be those who want to leak information, he says, but now it is easier than ever.

Meanwhile, Mr Assange says he believes that "courage is contagious" and that Monday's leak would encourage other whistle-blowers to step forward.

In a news conference on Monday, he said the organisation had "files that concern every country in the world with a population of over one million people, including the United States... Thousands of databases and files".

How the US government will react to such a high-impact disclosure is not known, but it should take note of what can happen when so many people have access to confidential information in a digital age.

According to an investigation by the Washington Post earlier this month into the US intelligence sector, 854,000 US citizens have the highest level of security clearance.

That's a lot of potential leaks.