Siblings in County Court accused of revenge bashing in Tarneit

FOUR siblings are facing court after allegedly gang-bashing two men with a baseball bat and metal bar - causing one to lose an eye - in a revenge attack in Melbourne's western suburbs. 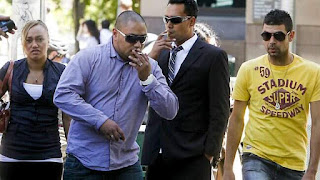 Wade, Jerome, Allisha and Jermaine Holloway, along with five others, forced their way inside a Tarneit home, where Allisha and her husband claimed they had been bashed earlier that day, the County Court heard yesterday.

Prosecutor Diana Manova said the accused were "acting in concert'' when they agreed to assault the men as payback shortly before 11pm on January 8, 2011.

The court heard some members of the group forced their way into the front door and some through the back door of the house, where four children and two couples were present.

It was alleged Jerome was armed with a 40cm-long metal bar and Wade with a shortened baseball bat.
Ms Manova said Hayden Faulkner - the accused's cousin and step-brother, who was involved in the incident - would give evidence of Jermaine bragging about jumping on the head of one alleged victim, Lincoln Arahanga, "while he was out cold'' and how the man had lost his eye.

Mr Faulkner would also attest to Wade telling the group he jumped on Mr Arahanga's head and repeatedly punched him in the face, she said.

He also suffered a fractured jaw, which resulted in the removal of four teeth, and multiple lacerations.
Stephen Wilson suffered cuts and bruising, facial swelling and a chipped tooth.

The attack was in retaliation to news that Allisha had been punched in the face earlier that day when she tried to break up a scuffle between the men and her husband at the home, the court heard.

Jerome - who wore silver headphones throughout the jury's empanelling and trial opening - pleaded guilty to aggravated burglary and recklessly causing injury to Mr Wilson and not guilty to the remaining charges.

Defence counsel told the jury the main questions were whether Mr Faulkner, whose testimony is relied on by the Crown, was a reliable and credible witness and who was responsible for Mr Arahanga's injuries.

The joint trial before Judge John Smallwood is expected to last between three and four weeks.

Another Trailer Park Trash criminal family in the spotlight.

A danger to society, but watch as the (Anglo-Masonic) legal system sets them free.