NBN's future still up for debate

AUSTRALIA will receive a national high-speed broadband network regardless of this year's federal election result, but the form it takes and the speed it delivers is up for grabs.

On one side, the Coalition will offer a fibre-optic network for faster internet access, and promises a quicker installation but slower download speeds. 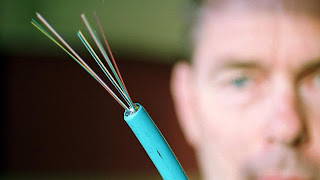 Telecommunications experts are divided over the proposals, with some arguing faster speeds will be needed by the time a Coalition network is complete, while others say its ability to be upgraded on demand or later is future-proofing enough.

Opposition Leader Tony Abbott says the Coalition's National Broadband Network will deliver a minimum download speed of 25 megabits per second to Australian homes by 2016, rising to 50mbps by 2019.

By comparison, Labor's NBN is connecting users at a minimum speed of twice that final target, at 100mbps.

"We are absolutely confident that 25mbps is going to be enough - more than enough - for the average household," Mr Abbott says.

The Coalition's network would be delivered to Australian households faster, and more cheaply, by failing to connect directly to homes.

Its fibre-to-the-node technology would instead connect fibre-optic cable to cabinets in the street, with houses connected to the cabinets using existing copper wiring now used to deliver telephone calls.

The speed of a home's connection could be determined by its distance from the cabinet, though the Coalition notes that speeds "exceeding 100mbps over short lengths of copper" could be possible.

In contrast, Labor's fibre-to-the-premises NBN could deliver downloads at up to one gigabit per second.

"Back in 2002, I forecast that by 2020 the average high-end user would be buying and affording 1Gbps download speeds," he says. "That is directly extrapolating what happened in the past. In 10 years from now, for example, every photo you've got will be stored in the cloud."

Telecommunications analyst Paul Budde says the Coalition's network is flawed because it cannot support these demands, at its minimum speed of 50mbps, and will be outdated at its completion.

"Looking back over the last five to 10 years, it is not too difficult to envisage and to predict that eventually those faster speeds are needed," Mr Budde says. "If you don't want to spend the money for a full upgrade now, what is their plan for the future?"

But Ovum research director David Kennedy says the Coalition's network can be upgraded to reach homes at a later date, delaying the investment until it is needed.

The Coalition says it will also allow consumers to pay NBN Co to connect fibre directly to their homes, but Mr Kennedy says the cost could stop many from using the technology.

Australia is literally in the dark ages with internet technology, of which a significant blame rests on the stranglehold of communication by Telstra.

Ill informed politicians 'dicate' what is acceptable as bandwidth to the consumer i.e. 25 Mbps, while other countries are already installing multi gigabit speeds.

Australia's policy is to install updates in retrograde, with no or little room for the future.

This policy holds especially for infrastructure projects, including technology.

Australia's government cronies are paving the way for a new 'third world' country, right under the noses of the sleepy 'sheeple'.

As long as the masses have access to mind numbing reality programs, like cooking, singing, and dietary trash programs, that's all that is needed to keep the masses entertained, keeping them away from matters of significance.
Posted by AuCorp at 11:53 AM