TOMATOES zapped with radiation could be heading towards your lunchbox or dinner table. 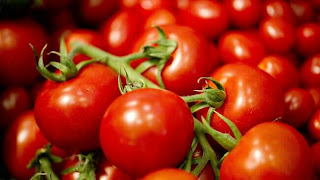 Food Standards Australia New Zealand has declared the treatment -- to destroy insects and bacteria, but which has been linked to pet deaths -- is safe for fresh tomatoes and capsicums.

Irradiated food must be labelled and notices placed at sales areas or on menus.

Queensland's Department of Agriculture, Fisheries and Forestry wants the option of an alternative fruit fly control after restrictions were imposed on dimethoate and fenthion, two common chemical insecticides.

"Decades of research worldwide has shown that irradiation of food is a safe and effective way to kill bacteria in foods, extend its shelf life and reduces insect infestation," the nation's food regulator said.

Ministers responsible for food regulation have until mid-May to decide on a formal approval.

While herbs, spices, some herbal teas, some tropical fruits and persimmons are already allowed to be irradiated, the bulk has been exported rather than eaten in Australia.

FSANZ says a dose of up to one kilogray is suitable for tomatoes and capsicums -- well below the levels in pet food.

Quite simply put, giving cancer to the masses.

The government or any other health body will no doubt show proof that the levels are safe.

In Japan during the Fukushima disaster, the government changed the acceptable radiation levels to match that what was coming out of the reactor, and it's surrounding areas, in effect exposing the masses to cancer risk.

The masses, especially migrants, the low educated, bogans, dole bludgers (unemployed) etc are seen as expendable items by the authorities, especially after their tax paying days are behind them.

This is just another way to 'cull' the peasants.