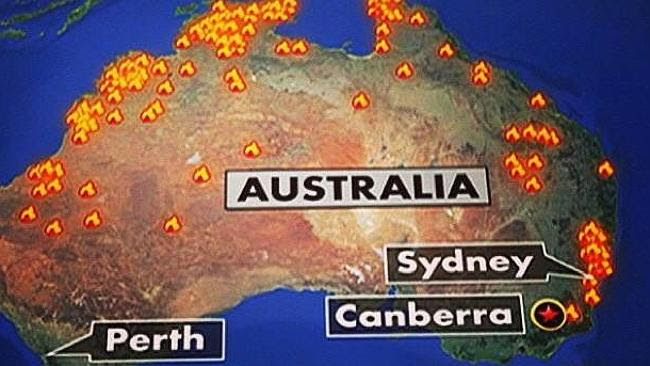 AMERICA, the nation which gave the world 307 Nobel laureates, has today shown that its media is about as smart as one of its famously dopey teen beauty pageant contestants.

In a bizarre map produced by NBC News, pretty much the whole of Australia is depicted as being ablaze this week.

You might have thought the bushfires of the past week have been confined largely to New South Wales, but noooo. Not according to NBC they're not.

According to NBC, pretty much the entire country is on fire, including vast swathes of Cape York, the entire Darwin region, and vast portions of Western Australia's Great Sandy Desert where you'd be lucky to find two blades of grass to rub together.

Now, it turns out there may be an explanation for what appears to be a major cartographical catastrophe.

In all likelihood, NBC has taken the image from a Geoscience Australia product called Sentinel. Sentinel is a national bushfire monitoring system which uses satellite data to enable emergency service managers and other users to identify fire locations across Australia.

At any given time, the map will show hazard reduction burns, bushfires which pose no threat to life or property, plus of course much more serious bushfires like the ones we've seen this week.

That's the mistake which NBC appears to have made. They've taken every fire on the Sentinel map and assumed they are all part of the current emergency.

As NBC Foreign Producer Cheryll Simpson admitted overnight, and we think she's a bloody good sport for doing so:

America tries to explain Aussie bushfires and TOTALLY FAILS! With bonus map which is pure gold

@antsharwood ughhhh, was kinda funny though - (covers eyes with hands)

NBC has also more or less assumed that the whole of Australia is NSW, which is disturbing given the network spent pretty much the whole of the Sydney Olympics camped on the Opera House steps. You'd think they'd have picked up a little Australian geography during their extended stay.

Then again, perhaps they thought they were in Austria all along. As anyone who watched the London Olympics would know, NBC has ongoing issues with working out which country is which. Or maybe all those kangaroos hopping down George Street left them a little muddled or something.


And these are supposed to be trusted news sources?

Also, the fires were lit by arsonists, nothing to do with the Global Warming, F.U.D. (Fear Uncertainty Doubt) factor.
Posted by AuCorp at 10:06 AM