Changing of the guard - Police State

Colours play an important role in the corporate world, a fact that is so important in today's society that it is no longer a myth or a hit and miss arena, but rather a studied science.

From the fast food industry, supermarket brands, labeling, corporate logos to law enforcement, colours play an important part of how the brain processes the information as to what stimuli are effected, and therefore how the person reacts.

In the corporate arena, the colour blue is symbolic of power, authority and might, and there is no better example than the 'Big Blue' referred to as IBM. On a local scale, BHP Australia's mining giant's old logo had two shades of blue.

The city's parking inspectors are referred to as 'grey ghosts' referring to the colour of their uniform, which was chosen to blend in with the concrete jungle.

In Australia, the police have been dressed in a light blue shirt, in line with signifying 'authority', but those days are coming to an end, with a significant change in policy to suite. 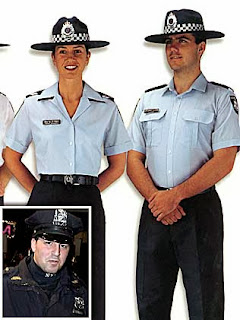 A change in colours / logos always denotes a change in policy.

What the police are and what they are supposed to be are two different matters.

The police are supposed to be 'public servants', but factually are business units working for corporations and NOT in the interest of public safety.

This is a fact the the government lap dog, the corporate media does not report on.

A list of police ABN's (Australian Business Number's) can be found here:

As part of the 'global' community and a new global order, Australia must be in line with its big brother, the United States of America.

One of the largest threats to ANY government is not an external threat, but rather an internal one i.e. its own people. The people can be seen as an enemy of the state, especially if they are in an awakened state to government oppression and corruption.

It is therefore a primary objective of any government to keep the herd population submissive, and various ways are used to achieve this objective.

The corporate media plays an important role as does sport, religion and law all in the name to keep the herd population submissive falling on the policy enforcers, the police.

The mainland of Australia's eastern sea board states of Queensland, New South Wales and Victoria have the most population, and each of the states are referred to locally by some as the 'police (or nanny) state'.

The Victorian police 'force' is taking the uniform from the light blue to a much darker blue, closer to a black, signifying the next stage of the 'police state'. 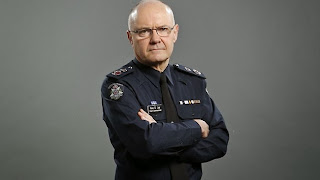 (Picture: the CEO of Victoria Police, Ken Lay - 'Lay' down the Law)

This is of course done gradually without much media attention or scrutiny as the objective is not to draw attention to the matter.

The so called media propaganda 'democratic society' that we allegedly live in, is long gone, with the rise of the police state, dictated by the fascist corporatocracy.

Welcome to the next stage of the police state of Victoria.

In talking to friends over the course of the weekend, topic of conversation centered on the crack down on 'bikies' and a lot of them felt something had to be done. I was able to change this feeling by asking two very simple relevant questions: Have you ever felt intimidated by a person on a motorcycle? And when did you last feel intimidated by a police officer?
Everyone that answered had said never to the first question and all were able to point to specific examples for the second question.