A letter from a member of the public was written to the Attorney General's (Robert McClelland) office on the 10 of June 2010, regarding the 1988 referendum as to the lawful existence of 'local government'.

As part of the response the following text is within the document:

"The Constitution does not currently recognise local government." 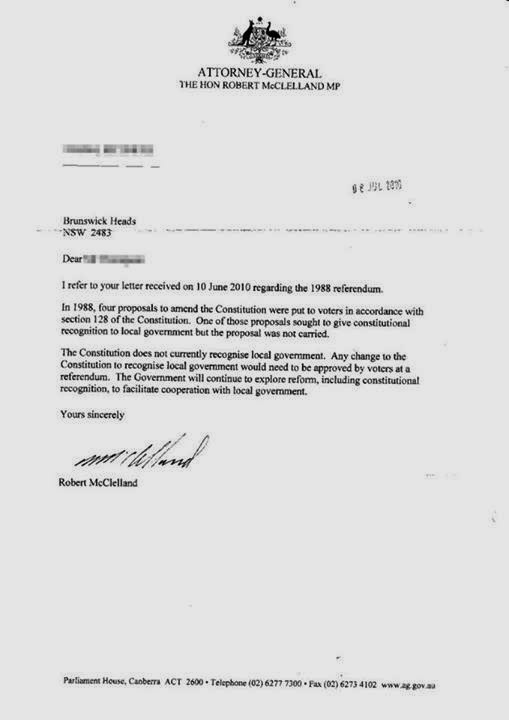 Robert McClelland was the Attorney General of Australia from Dec 2007 to Dec 2011.

During his time as an MP he was also working as a lawyer.

This was again proven in court in NSW a few days ago (May 1, 2017) by one Rob Bell of Albury, NSW, who disputed his local Council's right to levy council rates onto homeowners. His argument? Local govt not recognised.

Thanks for your comments Robert W!

There are only TWO 'lawful' (as opposed to legal) tiers of government in Australia that being:
1). Federal,
2). State.

THE most common mistake made is with reference to this thing called 'local government'.

With reference to the 'Constitution' (Commonwealth of Australia Constitution Act) the term 'local government' refers to the STATE government, and NOT 'municipal offices' which are a DEPARTMENT of the state.

Your knowledge of the Quick and Garran will help in any court scenario.

In your above example of the border town called Albury, one can see that it is apparently trading as "Albury City Council" with the ABN of 92 965 474 349, ALSO trades under the name of Retro Lane Cafe among other business aliases.

This so called 'city council' is NOT a DEPARTMENT of the state as it should be according to the document we call the 'Constitution.

This is just ONE point in order to abolish any action taken against you by a 'city council' extorting 'rates' from your 'person'.

In Victoria the 'city councils' make reference to the unlawful Local Government Act 1979.

What is Quick and Garran? I've heard of it vaguely, but I'm not familiar with it.

Quick and Garran are the authors of the Annototed version of the Australian constitution.