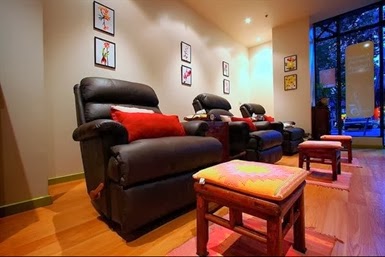 In Melbourne Victoria, over the past few years there has been an enormous surge in 'massage' businesses of Asian origins that have sprung up from inside shopping centres to business shop fronts on the streets.

There can be no doubt that a massage has therapeutic effect on the individual, both physical and mental, but there is another side to the business which may go unnoticed to average person.

Many of the massage businesses offer sexual services, which is illegal in Victoria if a business is not a registered brothel.

An introduction by a valued client or even the call sign relating to the dollars required by the service facilitator, by the hand sign of the ASL (American Sign Language) letter f, as depicted in the illustration, denoting 30 dollars for the sexual service known as a 'rub and tug'.

The police 'force' is given one of the more important roles, that being to keep society in order and subservient to government (corporate) rule, thus an enormous amount of trust, where the final decision whether to incarcerate individuals for whatever reason thought of, irrespective of legality rest with police.

An ex police 'officer' ( lets call him Rudie - a colloquial term derived from the word rude) in Melbourne is in charge of the northern suburbs area illegal prostitution ring, where the illegal brothels (nee massage businesses) pay him protection monies, where Rudie using his police sources within Victoria Police forewarns the business of any raids planned.

This is not an isolated case, nor does it involve one corrupt person within VicPol.

Immigration officials turn a blind eye to the importation of Asian sex workers into the country come to either study as 'hair dressers' to study English or come in on working visas, by secret payments from the employers of their future workers.

Should the corporate media decide to report this case, no doubt 'Rudie's' identity would be suppressed, and the police commissioner Ken Lay's remarks would no doubt provide little or no information, or even suggest the scale of the problem.

This is a matter of significance, as it is on a large scale, where police (or ex police) use their powers of arrest to intimidate for personal gain.

These types of crimes are generally not brought out by the corporate media, even if the small amount that are, have been deliberately misrepresented by the media.

Another significant action carried out by the corrupt organisation (business) commonly known as Victoria Police ( trading as VICTORIA POLICE, ABN: 63 446 481 493).

Thanks for posting this story, very insightful.
I realise you posted this a while ago, but I am interested in discussing this post further. I am writing a story about something similar. Are you able to provide me with your email so I can contact you?

Hi ... Thanks for sharing interesting story... I am really enjoy it