ALL FINES ARE ILLEGAL AND VOID.

Many Australians are 'issued' with a 'fine' from a source that masquerades as an 'authority'.

The reality is that the paperwork is factually a 'contract' enticing the proud recipient into an 'obligation'.

In this example the letter is allegedly from:

The reality of the situation is that there is no such entity as stated on the envelope called the "Infringements Court". This is complete fraud on a grand scale for Victorians who have falsely paid a 'fine'.

Notice the seal / coat of arms which is a corporate trademark, and has no legitimate authority WHATSOEVER.

Another point is that any company dealing in business with a 'customer' must disclose their ABN in their 'letter of offer', which in this case the 'Infringements Court' does not.

It is clearly stated that:

The Infringements Court is a venue of the Magistrates’ Court 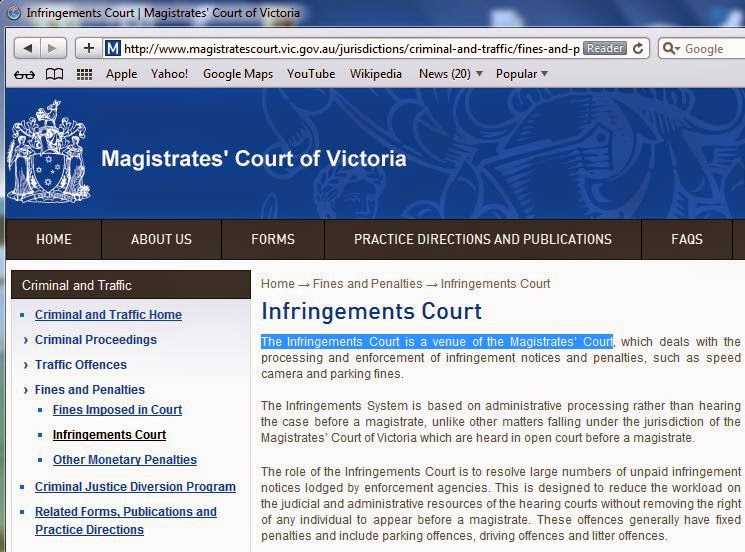 Therefore the recipient is being misled into a transaction with the Magistrate's Court of Victoria
ABN: 32 790 228 959, as being with the 'Infringements Court'.

Under WHATEVER Act you are being 'charged' under, e.g. Road Safety Act 1986, it is factually invalid.

The heads of state and police have been made aware of these facts, but choose not to respond, or if they do, they shun the matter away.

YOU MUST exercise this fact in any court of 'law', remembering that Australia's courts are places of business / trading / commerce and NOT law.

Any magistrate will tell you that they are bound to the Acts of that state, which stem from its Constitution.

In the case of Victoria, there are a few constitutions, only of which ONE may be valid.

Any so called law must have Royal Assent and must be printed in the government gazette.

Any 'law' at a state level that contradicts the Australian Constitution is invalid.

Entertaining the validity of the Australian Constitution (1901) can be a topic on its own, but any reference to the Constitution of 1975 is totally INVALID.

In order for ANY law to be passed lawfully,

The reality is that the Australian authorities are operating fraudulently in Australia, with an oppressive conspiracy against those who are aware of those facts and publicise the truth.

The police in response raid their homes, intimidate witnesses into signing statements under duress, assault others with brute force, financially destroy individuals via various means, and take no action when reporting criminal acts to police.

The so called police watch dog is a corrupt unit, dismissing many cases against corrupt police ranging from covering up road deaths committed by police, assaults, burglaries worth hundreds of thousands of dollars each instance, to covered up shootings.

Victoria is a police state ruled by (guns) force and (financial) fear.

The general populous is blissfully unaware of the totally fraudulent operations of its 'authorities'.

The Australian public are waking up to these corporations at a fast rate...won't be long before the big boy thieves are thrown over a cliff....