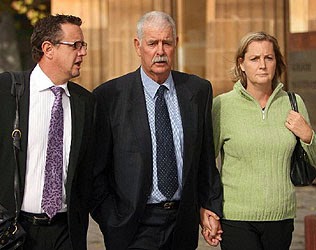 Sentencing Fraser for his crimes today, Judge David Smith said the officer had confessed to his actions during an internal police investigation in 1987 - and was demoted from chief inspector to inspector.

At the time, the statute of limitations prevented charges being filed. That law was changed several years ago, allowing the prosecution to proceed.

Judge Smith said the department had initially failed to properly act in defence of the victims.

"You had an illustrious career in SAPOL," he told Fraser.

"Despite the law, these charges always constituted serious criminal offending.

"Demotion of one rank would appear to be an astonishingly inadequate penalty."

The crimes occurred in his home, his shed and a swimming pool belonging to a friend.

"From any position, this offending was loathsome," Judge Smith said.

"You were a senior police officer, and these girls had no one to turn to.

"They were entitled to your protection and care, but you exploited them for your own sexual gratification."

The girls reported Fraser to police in 1986 - resulting in his demotion - and then filed charges again in 2007 following legislative change.

Judge Smith said Fraser - who has mild Parkinson's Disease - "stole the sexual innocence" of the girls.

He said the former officer's attempts to justify his behaviour were "lame, disingenous excuses".

He ordered Fraser be jailed for nine years, with a 6 1/2 year non-parole period.

Fraser will not be eligible for release until 2016, when he is 74 years old.

Police Commissioner Mal Hyde said he was "pleased to see the outcome before the Court today".

“Taking criminal action when the matter was reported in 1986 was limited by the legislation in place at that time,'' he said in a short statement.

"Since that barrier was removed in 2003, SAPOL was able to reinvestigate the matter and put the case before the Courts.”

“The discipline action taken against Graham Fraser following the matter reported in 1986 is considered to be inadequate, and he would certainly have been dismissed as a police officer if the case arose today.”

It may be difficult for the majority of the population to accept that the current Australian police 'force' is a criminal organisation.

The so called 'law' in this country acts in such a slow or even dismissive manner with respect to police that it could be viewed as supportive of the criminal actions of police.

Just one of many.

Any idea where I can find the court documents of this case?