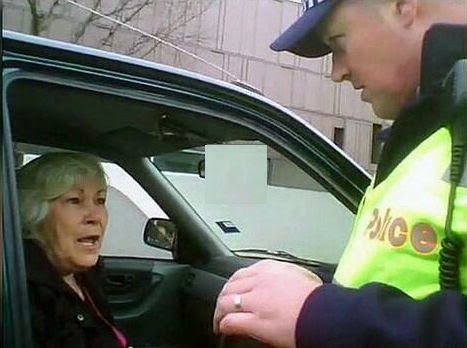 Victoria Police members who called a "warm hearted" grandmother a "f...ing nut case" who had no rights, are to be investigated.

A screaming and shouting match erupted between Linda Milazzo – a pensioner who had recently had a heart attack – and two policemen after she "clipped" a third member on an elbow while driving through a road block.

The ensuing altercation – recorded by a policeman's body camera – escalated to threats that she could be charged and jailed for attempted murder.

Judge John Carmody, in Melbourne's County Court, likened the conduct of the police to the basketball tactic of a "full court press" and pondered Chief Commissioner Ken Lay's response to the footage.

Judge Carmody saw and heard that when Milazzo, then 63, told Senior Constable Kael Oostuizen she had had a heart attack and was then having one he replied: "You don't look like you're having a heart attack to me."

A policeman also called her a "f...ing nut case", followed by laughter, and later when she mentioned her "rights" but was told that "you haven't got any rights at the minute" she became hysterical.

Milazzo recently pleaded guilty to obstructing police, driving in a manner dangerous and unlicenseddriving from the incident in South Yarra in May, 2012.

The court heard Milazzo, who has several prior minor traffic infringements, had had a "tragic early life" with a limited education, but became a registered nurse and has for some years worked voluntarily for organisations that included the Father Bob Maguire Foundation.

On the day of the incident she was delivering items to an elderly person as part of her free ironing service.
The police footage was played in pre-trial argument before Judge Carmody and relied on by prosecutor Mark Regan as depicting her driving and conduct after the case resolved into guilty pleas.

Milazzo stopped after a short pursuit and Senior Constable Oostuizen and acting Sergeant James Robbins struggled to remove her car keys, during which she quoted a court judgment she wrongly claimed allowed her not to stop.

Prosecutor Mark Regan said there was "great uncertainty" about what could happen, the policemen were trying to "apprehend" her and their first priority was to immobilise the car for safety reasons.

Mr Regan said the police could have "bodily dragged" Milazzo from her car but had "exercised restraint".

He conceded some language was used that "perhaps with the benefit of hindsight you wouldn't want to see" and that there were "intemperate moments" and words said in the "heat of the moment".

Judge Carmody asked Mr Regan to "imagine if the [chief] commissioner heard the full set of these tapes".
"She's a nut," he recalled Milazzo being described. "[Said] As loud as you like."

Judge Carmody commented that it was "not the way" he [Ken Lay] would want his men or others to deal with members of the public.

Defence barrister Alan Marshall said Milazzo, now 65, could not understand why she didn't stop and that "everything just overcame her", and while the police obviously had concerns "she wasn't perhaps assisted" by their behaviour.

"In basketball terms," Judge Carmody commented, "it was a full court press. That's what happened."

Mr Marshall added that for "a few seconds" someone who was a "warm-hearted grandmother" behaved in a "highly unusual fashion" and that "all sides probably now regret" their part in what occurred.

In his sentencing remarks, Judge Carmody said the "manner of the approach" by police to her car and their statements and hers "escalated the emotions and behaviour" of everyone and had caused her to obstruct them.

Judge Carmody regarded Milazzo's dangerous driving at the lower end of the range and told her she had done much good work for others, but added that police were entrusted with the difficult task of ensuring that "everything works for our community".

Milazzo was put on a non-conviction undertaking to be of good behaviour for 12 months for obstructing police, was convicted and fined a total of $1000 on the other offences and was disqualified from driving for six months.

Judge Carmody noted that she had already been partly "administratively punished" as Mr Marshall had told him that acting Sergeant Robbins had advised VicRoads shortly after the incident – and after she had renewed her licence – that she may not be a proper person to be licensed.

Because of that, she was asked to supply a psychiatric report which she declined.

Inspector Ian Geddes of the police media unit told Fairfax Media on Tuesday that members were expected to demonstrate professionalism "at all times" and complaints about unprofessional behaviour were taken seriously.

"As a result of the issues raised in this case," he said, "the matter has been referred to Professional Standards Command for further investigation".

More corrupt police caught out?  Harassing motorists?
If they really are not corrupt, why does the matter need to be referred to the Professional Standards Command?
Posted by AuCorp at 4:23 PM