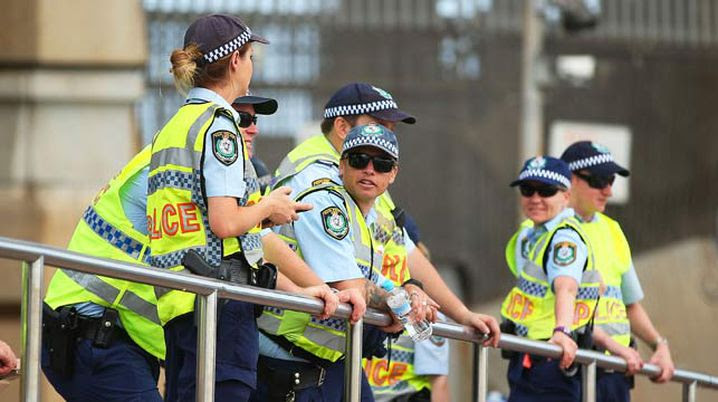 NSW Police officers will be allowed to remove their name badges and replace them with numberplates. (Getty)

Police in NSW will be given the option of swapping their name badges for numberplates in order to protect their identities from being exploited for online harassment and threats of violence.
The option to swap the identity plates that have long sat pinned to officers' chests could be replaced if individuals choose or feel the need to conceal their personal identity from being exploited by criminals or online trolls.

NSW Police have reported an increase in the amount of abuse they have received directly online or over the phone after being personally identified by members of the public, the Daily Telegraph reports.

The uptick in threats is being attributed to increasing prevalence of recording equipment at events such as protests which have later been posted online and analysed for personal detail by members of the public that might have personal grudges against individual police.

Should NSW police officers be given the option to hide name badges to protect identity?

The NSW Police association also highlighted the increased danger in the age of terror attacks.

"With the advent of social media and the ongoing risk of terrorism we need to make sure we protect our officers," Police Association of NSW president Scott Weber told the newspaper.

"We are seeing time and again officers being trolled and attacked via social media.

"The last thing we want is officers being targeted at their station, in their local community or at their home."

In one instance police said a western Sydney man allegedly called Rosehill Local Area Command and said he was a member of the Islamic State and threatened to cut a particular cop's head off.

The new agreement will allow officers to replace name badges with serial numberplates which, while not a mandatory replacement, are being seen as a safer option for officers serving in frontline operations.

The vice-president of the Australian Privacy Foundation, David Vaile, said the name badges were an important factor for the public to be able to identify officers accused of abusing their power but acknowledged police concerns about have their private details being shared and exploited online.

Identifying police has been a civil liberties concern since the Vietnam War when the removal of badges was seen by protestors as a sign that things might get violent.

At the APEC protest in Sydney in September 2007, more than 200 police were photographed without their name badges which protestors said allowed them to conceal their identity and act aggressively toward the public.
9news.com.au  19 Jan 2015