“Ignorance of the law is no excuse”
-quoted by many a judicial clerk, magistrate and judge.

The so called ‘authorities’ in Victoria are in a bit of a pickle, as there has been deception (fraud?) on their behalf.

The Victorian motoring public have been taken for a ride when it comes to paying something called a ‘fine’ from an apparent court called the ‘Infringements Court’.

In the last week of February 2015, at a place of business, commerce and trading commonly known as the  Magistrates’ Court it was confirmed by a clerk of the office, that ‘they’ have a bit of a problem, which they trying to ‘fix’ (as quoted by the clerk), with regards to an ‘infringement’ brought before the court.

The next question that begs to be asked is; what is the meaning of ‘fixed’ ?

- for the benefit of the business (commonly known as the ‘court’)? or
- for the upholding of ‘good governance’ / law? or
- is it as per definition of ‘fix’ in Black’s Law dictionary (first edition 1891) -
FIX . To liquidate or render certain. To fasten a liability upon one. To transform a possible or contingent liability into a present and definite liability.

Anyone who has been driving their vehicle (couriers, taxis, semi trailers, buses, etc), or [as opposed to] anyone who has been travelling in their automobile (engaging in a non commercial activity e.g. parents dropping of children at school, leisurely Sunday cruise through the mountains, to the beach, etc) may be familiar with a so called ‘Infringement Notice’ form a place called the ’Infringements Court’.

Q. Was this issued lawfully?
A. Well, apparently not. 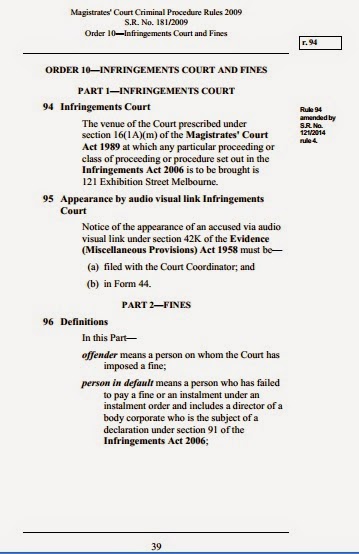 94 Infringements Court
The venue of the Court prescribed under section 16(1A)(m) of the Magistrates' Court
Act 1989 at which any particular proceeding or class of proceeding or procedure set out in the Infringements Act 2006 is to be brought is 121 Exhibition Street Melbourne.

The so called Infringements Court is claimed to be at the following addresses:

What the authorities don’t want you to know

The gazetted address is different from what they allege on their returned mail envelope.

Q: Where are the actual ‘hearings’ held in this so called ‘court’?

A: There are NO premises where these ‘hearings’ are held, and this is your silver bullet!

Briefly, all Australian so called courts must function under certain rules.

They must function in accordance with the

- No court in Australia acts consistently with Chapter 3 of the ‘Commonwealth Constitution’, as required by law.

The so called ‘sheriff’ of Victoria is NOT following through with the enforcement of those fines.

The mainstream media cover up

A mainstream media journalist was approached with regards to this break through matter, and asked whether they would publish an article in their publication regarding this monumental fraud. The response given was that they are not allowed to report on matter of such significance.

The government will NOT issue you a cheque and say ‘sorry’., for their fraudulent behaviour.

You must redeem your unlawfully issued fine, also claiming ‘tort’.

It is also doubtful that this topic will make the ‘news’ headlines of the mainstream media.

If you have been a victim of this extortion or fraudulent claims against your ‘estate name’, then you must take further action.

N.B.        1). The validity of law in Victoria is put aside for the purpose of this article.
2). You may need to do your own research to realise your matter.
3). Credit is given to those individuals who have researched and exposed this corruption.
4). Errors and omissions excepted (E&OE).