If you have had anything to do with the way 'authorities' operate on the land mass called Australia, be it at the drone level e.g. serving or stacking paperwork all the way to the alleged to top the legal food chain, be it a high court judge, barrister, Q.C., policy maker or whatever you would be aware of the huge corruption within the system.

From judges accepting bribes ranging from 'free' printers to cards loaded up with cash that can be withdrawn from ATM's at the rate of $1000 per day, Australia's so called 'justice' system is nothing more than white collar criminals running an extortion racket, where you are deceived, coerced, intimidated or beaten into submissiveness / compliance / contractual agreement.

Oh, don't worry 'justice' will be served, with the judicature and all it's minions supporting the fraud.

It's not only about what you read (on the internet), but also what you do not.

Many a case has been erased from the archives so that the masses do not get an idea of what's really going on in the place of business / trading / commerce commonly known as the court, so that they do not apply this for their benefit.

A sore point of many Australians is a (necessary?) evil called TAX, where the conversation may follow for those in the know that the ATO (Australian Tax Office) is not a legal entity and therefore cannot 'tax' you.

But what proof would one have of this?

Where would one turn to, to obtain this information?

Well, as many a learned 'natural' person may tell you, the [bible?] for Australasian legal information would be the Australasian Legal Information Institute, but of course, with the internet address of www.austlii.edu.au

Let's go there and find a tax case called...... hhmmmmm...... Moeliker v Chapman as "someone on the internet told me".

P.S. The Maggots Magistrates' hate it when the (uneducated) plebs refer to High Court cases.

A simple search for the month of May in the year 2000 will give you the following results: 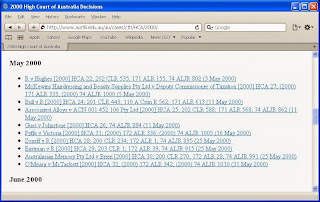 So, in summary the case (that the ATO is not a legal entity) is NOT available for the public to download.

The transcript of the case is available at:

In order to obtain the above file, you need to login to a Google account.

MAKE NO MISTAKE - The 'authorities' (you know the AFP (Australian Federal Pigs Police), the cops, judges, magistrates, judicial clerk, registrars)  lie, falsify evidence, destroy evidence, tamper with photographs / video evidence, shred documentation if they are going to be placed in the position of being exposed.
There are plenty of other court cases that are hidden from the public, that expose the corruption of Australia's 'justice' system.

If you have any documentation that has been removed or altered from the 'archives' please contact us so this information can be replicated to many other places, of course in the interest of 'good governance' and for 'the people'.


Sacked AFP officer: 'We lie to members of the community on a daily basis'

Can you please point out the particular section whereby the ATO and its regulations are not valid in teh case in questionplease.

The penny may not drop after even a few reads.
Pay attention to who is saying what, as it's NOT spelled out for the 'lay person'.

I would like a reference to the legislation pased and assented to regarding Social Security Act / Work for the Dole, i cant find it in the 1994 and 2003 legislation? ?