Serf - how the authorities classify ALL Australians

There is a term that can describe ALL 'Australians' living on the land / continent.

Not many people would be aware of this term, or even comprehend what it really means.


A 'yes' to any of the above questions, and you are in fact a corporate slave.

You are an entity 'owned' by different 'stakeholders' from a document called the your birth certificate, where you are owned by the state where you are 'registered' in.

A term that describes your enslavement, and how you are viewed by the 'government' (read corporation conglomerate), the so called 'authorities' and how the courts or judicature view your measly existence can be described in one easy word, a serf. 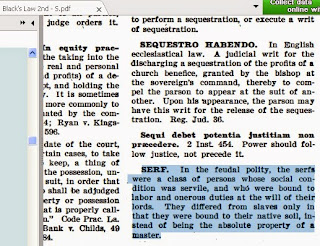 The illustration above, from Black's Law Dictionary Second Edition (1910), contains the words:

SERF. In the feudal polity, the serfs, were a class of persons whose social condition was servile, and who were bound to labor and onerous duties at the will of their lords. They differed from slaves only in that they were bound to their native soil, instead of being the absolute property of a master.

The better the people can comprehend the situation they're in, the better they can find a remedy to their woes.