In Victoria Australia, a business called the 'Sheriff's Office' which is headed by a person called Brendan Facey is involved in an extortion racket no doubt worth millions of dollars annually defrauded from the unsuspecting masses.

And it all starts with a simple template letter that has been changed from a previous version to this current version, which includes the words against a 'Natural Person'. 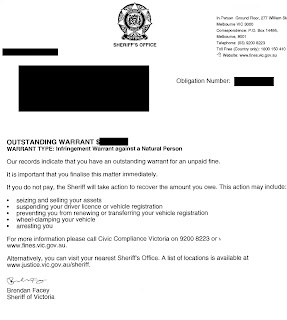 Note: the above illustration is a part scan of an entire document where the bottom part labeled 'Payment Method' is omitted. Also as seen, the personal details of the potential customer have been blacked out.

(2) A natural person is connected with a corporation if, and only if, the corporation:

Since NONE of the above pertains to you, the 'person', who has obtained this letter from the so called 'sheriff' then any attempt to contract or obtain any monies as a result, is fraud / extortion / coercion meaning a criminal offence.

Note: The actual validity of law in Victoria is put aside.

The question is, does the Sheriff's Office take a cut in the fine. That would make it a Corporate issue, else the Corporation is merely the service provider with powers.

I can tell you how it worked in the beginning, which must have been prior to 1993. I was at a mechanics in Bayswater when a Sheriff arrived and asked if he could see someone. The bloke he was asking said "He is my brother, and he is in Canada. See those 4 MG's there, that is what we buy and sell, anyway, how much does he owe you?" "$10" (No word of a lie) "Oh, is that all, I will pay for it." "No, only he can, and as he is not there I will take what I want." He used his mobile and soon after a moving van came and he started loading things, including the $5000 hot pressure wash. Then the tow trucks arrived and he took all 4 MG sports cars. I asked him. "What do you do with all this stuff?" He answered with his cold hearted eyes and said "I can sell everything I want, as long as I pay the Sheriffs Office the $10."