How to plea in court

Most people who end up in court for their ‘offences’ may not know of their rights or even what options are available to them, even (especially?) when they hire a lawyer.

There is a deliberate conspiracy by the judicial system in order to promote activity that is financially beneficial to the courts, i.e. a quick ‘in and out’ so that as little time as possible is spent on the ‘accused’ in order to maximise profits.

The more you spend time in a court the less financially profitable your matter becomes.

The age old misnomer of a ‘good’ lawyer is realistically out the door, especially if the situation calls for your plea to be ‘guilty’ with a ‘slap on the wrists’ fine upon your exit.

What a ‘good’ lawyer should be doing is examining the Act that you’re being reprimanded under, and then challenging the actual validity of that Act (a 'no plea'), an action that lawyers deliberately do not make their clients aware of that exists.

Australian ‘law’ for what it’s worth is a legal ‘sham’ something any constitutional lawyer should be able to reaffirm.

Apart from this ‘constitutional crisis’ lawyers do not talk about the actual validity of law with their ‘clients’ as this action would expose the invalidity of law in Australia and expose the true criminals in office to litigation.

So what’s one to do in court?

Any action taken against your ‘person’ in the form of ‘administrative’ law such as (but not limited to); a speeding / red light camera fine; parking fine; any ‘city council’ fine ‘should be answered with a plea of ‘no plea’.

As shown in example: 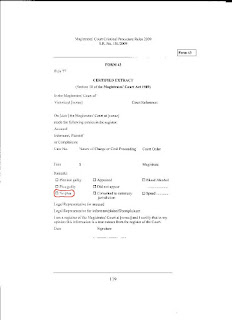 How they deceive you.

You may be at the court counter or even inside the actual court room where you could be asked what plea you are making.

If you’re at the counter the registrar (or whoever) after asking you the question, and listening to your response (of ‘no plea’) may put your plea as ‘not guilty’ or ask you in a reaffirming manner “so that’s not ‘not guilty’” or “you have to make a plea of guilty or not guilty”.

The moment that happens you should inform them that they are perverting the course of justice and point them to the relevant sections of the Crimes Act.

If you’re inside the courtroom where your ‘person’ is in front of a magistrate, judicial registrar or the ‘person behind the bench’ you might be asked the same question.

Once again when/if you state your plea as a ‘no plea’ that person could say “you mean not guilty” or “I’ll take that as a not guilty”.

The moment that person out the front states this, you remind them that they made a plea on your behalf, where the matter must be halted, and that person is told that they must remove themselves from the courtroom, where they will be subject to a judicial review.

Judicial review forms are available from the County Court or from the link:
http://corpau.blogspot.com.au/2015/08/judicial-review-forms-rules-for.html

Whilst you're at it get ALL the facts from them with a Form29A - Notice for Discovery (Vic - civil matters) contained in the link:
http://corpau.blogspot.com.au/2015/06/form-29a-notice-for-discovery-victoria.html

Note: The above information should be used for educational purposes only.

Consulting someone who 'practises' law rather than someone who actually uses it could be detrimental to your desired outcome.

s.64 of Criminal Procedures Act 2009, handles a non-plea. The magistrate can interpret a non-plea as a not-guilty stance.

Also consider the "election" stage of a criminal court hearing, where the Accused can preclude the case (after Prosecution's case made), like asking the case to be thrown out, or moving on to calling witnesses etc.

Ok 4years down the track will l get a reply .lol. But show me the validity of any legislation after dual citizen Bob Hawke was in the hot seat and created the fraudulent Australia act. ?