Please also see new and updated information in the blog post of the title:

The unlawful signature of Victoria's Sheriff Brendan Facey in the link:


Many people have caught on to the illegal actions of the Victorian Sheriff – Brendan Facey, his alleged ‘deputies’, and the cover up by the authorities.

Many people have written to the ‘sheriff’ Brendan Facey from the ‘Sheriff’s Office of Victoria’ (current postal address: PO BOX 14486, Melbourne Victoria 8001) in order to obtain the alleged warrants that the sheriff alleges exist.

To date none have been provided by the ‘Sheriff’s Office of Victoria’.

People have also written FOI (Freedom Of Information) requests to obtain the alleged warrants, but again none have been provided, thus far.

Some people have obtained responses that the ‘warrants’ do not exist.

According to ‘law’ the warrant is supposed to be generated in accordance to a current regulation called the INFRINGEMENTS (REPORTING AND PRESCRIBED DETAILS AND FORMS) REGULATIONS 2006.

The form for the warrant (to the ‘natural person’) is contained within Form 1 of the section called SCHEDULE.

The illustration below is that form with additional comments added, as to the validity of the warrant, in red. 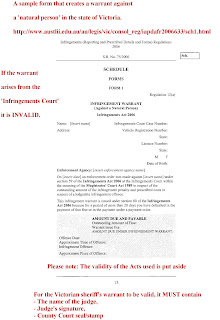 Make no mistake about it, the Sheriff’s Office of Victoria and the entire chain of command are committing criminal activity against the people.

This is not a matter about your (alleged) offence but rather the gross miscarriage of justice regarding the whole process by the people involved.

They are aware of it, and have been notified, but still we see the fraud continuing.

Please note: The actual validity of the Acts or Regulations used is put aside.

Hope I never have to see one in real life :)

Where do you get this information from that the warrant must contain the following ?

The name of the judge
The Judge’s signature
County Court seal/stamp.

Can't the Magistrates court authorise Warrants ? If not why ?
cheers
Thanks
Debra Engel

The things that stand out for me are the all CAPS wording, the square brackets which as we know removes it OFF the page, and the grey shaded area which is classed as a box, I believe, which means all that info inside that greyed area isn't on the page, four corners rule.