Here is another reason you cannot ever trust the likes of Victoria Police, the OPI (Office of Police Integrity), IBAC (Independent Broad-based Anti-corruption Commission).

See article from 10 Feb 2010 by heraldsun.com.au of the headline:

He accused the Office of Police Integrity of shredding a sensitive file for political reasons because it detailed his involvement with Labor MP Martin Foley, who was chief of staff to Police Minister Bob Cameron at the time.

"The Foley file would have contained all sorts of confidential material as I spoke to him regularly about all manner of things during the time my phone was bugged, including the road accident of then premier Steve Bracks' son Nick," Mr Ashby told the Herald Sun.

"It shouldn't have been shredded. It should have formed part of the material I was legally entitled to have to prepare my defence."

Mr Ashby came out fighting after being acquitted of perjury charges.

The case against Ashby collapsed after the OPI failed to legally set up the hearings into alleged leaks about a murder inquiry. 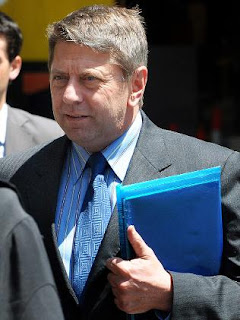 He called for a judicial inquiry so his allegations against the OPI, Victoria Police and the State Government could be tested.

"This needs to be done before this year's state election so various elected officials can be questioned under oath and voters can judge them on their answers," Mr Ashby said.

Mr Sword yesterday confirmed he spoke with Mr Ashby about the time Mr Pallas quit his job as assistant secretary of the ACTU to join Mr Bracks in 1999, when Mr Bracks was opposition leader, but denied telling Mr Ashby about any union payments to Mr Pallas.

He said Mr Pallas was concerned about his holiday pay and other entitlements, and having to take leave of absence, when he was offered the Bracks job.

"I remember there was something like that, but precisely what I don't know. But the union certainly didn't make any payment to Tim or top his salary up," he said.

The Herald Sun believes Mr Pallas will deny the Ashby allegations, but a spokesman for him would only say that Mr Pallas was not going to respond to "spurious allegations such as this".

"If Mr Ashby has any evidence of illegality or impropriety by the OPI, or any of its staff, he should produce it," he said.

Mr Ashby said he stood by his allegations about the OPI and Mr Pallas and would be happy to expand on them if he got the judicial inquiry he was calling for.

Opposition police spokesman Peter Ryan backed Mr Ashby's call for a judicial inquiry to investigate the claims against Mr Pallas and others, saying they went to the heart of the Brumby Government's integrity.

Mr Ashby also claimed the OPI repeatedly offered him various deals if he would agree to give evidence against former police union chief Paul Mullett.

"But the fact is I was never going to admit to something I didn't do and I have no knowledge of Mullett doing anything wrong," he said.

He claimed at least one of those witnesses was prepared to give evidence saying the OPI put things in her statement which she never said.

He alleged he had evidence which suggested the OPI probe was politically motivated to get rid of him and Mr Mullett and had nothing to do with the leaks to murder suspects the OPI claimed it was about.

In an exclusive interview with the Herald Sun, Mr Ashby also:

REPEATED claims Mr Pallas warned him to be careful talking on the phone to Mr Mullett and that the Pallas warning came long before the OPI probe was made public. Mr Pallas has previously denied any prior knowledge of the OPI probe or tipping Mr Ashby off about anything.

ACCUSED the OPI and Victoria Police of making an illegal search of his office without a warrant.

VOWED to pursue his accusers for compensation.