So publication themercury.com.au reported on the 1st of December 2016, that County Court Judge called a court regular Vasilios Kyriazis, "a complete pain in the bottom".

The story goes that Kyriazis was appealing a conviction for failing to provide his driver’s licence to police when he was pulled over in Bulleen in November last year.

So let's hit the law (internet) pages to see if a Victorian driver has to produce a licence.

The authorities tell us that the Act that 'drivers' fall under is the Road Safety Act 1986, irrespective if it is valid or not, we say it's not valid, but don't tell Chettle.


Therefore that means if you are over 26 years of age you do not need to have the licence in your 'possession'.

Therefore Vasilios Kyriazis was under no lawful obligation to produce his licence to police.

This action shows that the people in Victoria Police are vexatious against Kyriazis and Country Court judge Geoffrey Chettle is incompetent as a judge and should be removed and have action taken against him.

As a result of the vexatious actions of Victoria Police they could be sued under tort law.


See article from 1 Dec 2016 by themercury.com.au of the headline: 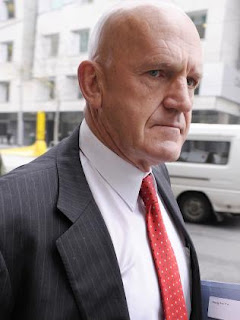 ONE of the state’s most senior County Court judges today labelled an abusive defendant a “complete pain in the bottom” and said he would have convicted him of that charge if only it existed.

Judge Geoffrey Chettle labelled court pest Vasilios Kyriazis a vexatious, annoying “pain in the bottom” during one of the more entertaining court hearings.

Kyriazis, who is a regular face around the courts, was appealing a conviction for failing to provide his driver’s licence to police when he was pulled over in Bulleen in November last year.

Kyriazis refused to participate in his own appeal, instead spent the morning making outbursts from the dock where he accused Judge Chettle of denying him his legal rights and threatening to report him.

At one point Judge Chettle wondered why the court gave “these people a platform”.

At that point Kyriazis accused Judge Chettle of disrespecting him, before refusing to give evidence in his own appeal.

Judge Chettle convicted Kyriazis of the failing to hand over his licence, but did not fine him.

He also declined to prosecute Kyriazis of contempt of court, saying he did not want to give him any “oxygen”.

“The offence of being an annoying, vexatious and complete pain on the bottom he could be convicted of that,” Judge Chettle said.

“But I do not propose to give him anymore oxygen. He can leave the court.”

Kyriazis strode out the dock and shook hands with security staff before leaving.

Although s 19 is pretty ambiguous, it is merely is an abstract speculation that it implies the opposite of "under 26" in the way suggested. It doesn't affect the statutory requirement to produce a licence anyway, because the relevant provision for anyone "older" than 26 is set out in s 59(1) of the Road Safety Act.