It can take 20 years to see 'justice' against police personnel who commit criminal activities, as in the example of Corinna Horvath where she was beaten senseless to a point where she did not even remember her name.

This is the extent of thuggery, extortion and violence Australia's police 'force' commit against the general populous.

It's as if the masses where the enemy of police and not where the police where 'public servants', you know where the tax paying public being technically their employers.

Many people are not aware that the police within Australia do no act lawfully, but as always in any criminal matter, the crime must be alleged then followed up with accordance to the 'law'.

This is just one example of many that rarely get reported on by the mainstream media of abuse by Australia's police.

Twenty years to obtain justice against police, where a member of the slave population can be imprisoned for a parking fine.

They are the laws of a penal colony, and not a 'free' society / democracy.

Note: We recommend that any and all interaction with police be recorded either discreetly or openly.

Doctor and his wife win $1m after being tasered 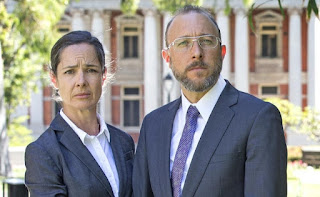 A law professor and his wife who were yesterday awarded more than $1 million in damages after an unlawful arrest have told how they risked going bankrupt to expose how they were treated by police officers.

Robert Cunningham and Catherine Atoms wept in the District Court yesterday as their eight-year battle resulted in a judge announcing the massive payout.

Judge Felicity Davis found they were assaulted, tasered, unlawfully detained and maliciously prosecuted by police after stopping to help a stranger on a night out in Fremantle in 2008.

But it was a hollow victory, with Ms Atoms’ career as a community engagement consultant in tatters.

She was put into “performance management” in her relatively new job after being charged by police and by the time a magistrate threw the case out 18 months later, she was on her way “out the door”.

The bulk of damages — $1.024 million — were awarded to Ms Atoms for loss of earnings and the distress and back injury she suffered, with $110,000 awarded to Dr Cunningham.

Judge Davis told the court that she calculated percentages of liability for individual officers and the State and made an order for “aggravated damages” against one officer, Simon Traynor.

The police were represented by government lawyers and supported by the Police Union, which declined to comment yesterday. It is considering an appeal.

Outside court, the couple toldThe Weekend West that they would have been financially devastated by legal costs of the other parties if they had lost the case.

“We would have had to file for bankruptcy, that’s what was on the line for us,” Dr Cunningham said.

“We had to sue both the State and the individual who had separate legal counsel, so we would have been subject to two sets of legal costs of an 18-day trial.”

Dr Cunningham and Ms Atoms took the action after all of their efforts to hold the officers to account failed — a police internal investigation cleared them of wrongdoing and the Corruption and Crime Commission agreed with the outcome, refusing to instigate its own inquiry despite criticism by its then parliamentary inspector.

“I have a great sadness that the legal system pushes you into dollars and cents when that’s not always what it’s about,” Dr Cunningham said.

“This was our last resort, so it’s not as though we signed up for a civil action on day one.

“We were concerned about the systemic issues and how less privileged people in society may be subject to this type of behaviour by the police on a regular basis and all of the consequences that flow from that.

Ms Atoms said she would take no satisfaction from the decision unless it sparked change. “I think it’s important to recognise that a lot of people experience far worse,” she said.

Dr Cunningham called for the CCC to finally hold its own investigation of the case.

“From our personal experience, we’ve learnt that unfortunately the CCC does not appear to be fulfilling its mandate of successfully overseeing the activities of the WA Police service,” he said.

“Until we have some confidence that this kind of thing is less likely to happen as a result of this, through some sort of systemic review, then we haven’t been fully successful in this action.”

“The society has spent all of this money on an 18-day court trial. Imagine what the CCC could have done in relation to this issue in 2009 and 2010.”