So the corporation conglomerate commonly referred to as the 'government' tells it's slave population that "speed kills" via graphic television ads and also that (speed / red light)cameras save lives.

When the government resorts of TV commercials you'd think something dodgy would be up, right?

Of course not you tin foil hatter slash 'conspiracy theorist'!!!

Well the government DID advertise to people that they must fill out the 2016 census forms, where many people on social media posted that there was no such lawful direction to do so, which also fell under the #censusfail hashtag for a botched up IT infrastructure concerning the census.

Can you even trust the mainstream media with reporting accurate or factual events?

Well, not from where we stand with the reports of fairly 'important' news articles that we were made aware of.

The newspaper publication the Herald Sun published this article on Saturday the 3rd of December 2016 sans comments in red: 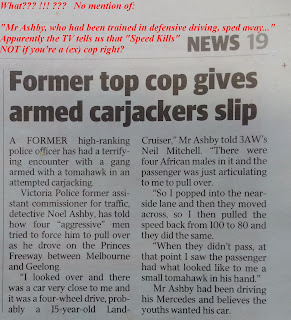 What we find 'concerning' is that an ex 'top cop' was astute enough to notice that the Land Cruiser was 15 years old, but failed to note the number plates of the vehicle with the youths inside where the African youths had a weapon, allegedly a tomahawk.

It was stated by the media in an online version of the article that the ex 'top cop' sped away, therefore he admitted that he was 'speeding', a criminal offence at law.

It is unacceptable that an ex 'top cop' speed given the fact that police beat the populous into submission on road crimes, and that 'speed kills'.


Noel Ashby therefore should be charged for a number of offences including reckless driving since he sped away, IF the police are really serious about the road toll.

Does it seem like the police can do whatever they want, where even road laws do not apply to them because they did a 'defensive driving' course?

See article from adelaidenow.com.au of the headline: 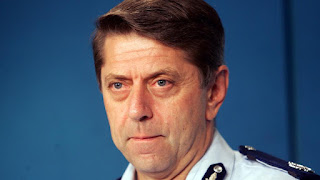 A FORMER high ranking police officer has had a terrifying encounter with a gang armed with a tomahawk in an attempted carjacking.
Victoria Police Former Assistant Commissioner for Traffic and Detective Noel Ashby has told how four “aggressive” men tried to force him to pull over as he drove on the Princes Fwy between Melbourne and Geelong.

“I looked over and there was a car very close to me and it was a four-wheel drive, probably a 15-year-old Land Cruiser,” Mr Ashby told 3AW’s Neil Mitchell.

“There were four African males in it and the passenger was just articulating to me to pull over.

“So I popped into the near side lane and then they moved across so I then pulled the speed back from 100 off cruise control to 80 and they did the same.”

It soon became clear the teens had sinister intentions.

“When they didn’t pass, at that point I saw the passenger had, what looked like to me a small tomahawk in his hand,” Mr Ashby said.

Mr Ashby had been driving to Geelong in his Mercedes when his car’s lane encroachment alarm went off.

He believes the youths targeted his car.

“They picked my car out. I was near the end. It’s a Mercedes and they clearly picked it out. Its clean, I look after it. I like cars, always have but they clearly targeted it,” Mr Ashby said.

Mr Ashby, who had been trained in defensive driving, sped away and the men continued to follow before later disappearing into traffic.

The former top cop said “anything could have happened” had he pulled over.

“I think I could have been in some trouble and I think people would normally act in good faith and potentially stop and that’s where the danger starts,” Mr Ashby said.

“I was wary straight away, the car was behaving OK, there’s nothing wrong with it, it’s less than a year old so there was no real reason for them to be indicating any problem with the car.”

Though under law drivers are required to pull over if there is a crash, Mr Ashby said that if anyone had fears they should instead drive to their nearest police station.

“The message is, traditionally if we get bumped we stop and the law says if there’s a crash of any description, that’s what we have to do and that has to be respected,” he said.

“But if there’s doubts, if you saw what I saw yesterday, how I felt yesterday, there is no way known I was going to stop. The next thing was Triple 000 and head to the nearest police station.”

The offenders were described as in their late teens and of African appearance.

They were driving a Land Cruiser which carried a red P plate that had white writing on it.

I didn’t get a chance to look at the numberplate ... that’s how quick it happens,” Mr Ashby said.


Originally published as Ex top cop caught up in carjack drama
Posted by AuCorp at 12:40 PM

It's hard to believe they don't record traffic on main hi-ways too. If so they could have easily brought up footage of the cars.

Crimtrac databases probably have all passing traffic at various points.