Victoria's new road rules 'interesting' but are not law 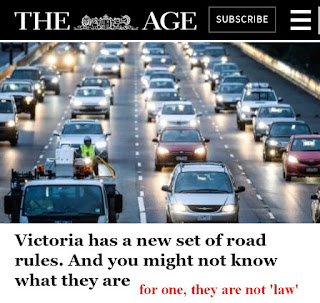 The buffoons in government have apparently had a brainstorm and implemented new rules on Victorian roads.

The good people of Australia are told that laws are to be made for "peace, order, and good government" (from a law called the Commonwealth of Australia Constitution Act).

Thankfully road rules do not fall into any of the above mentioned categories (i.e peace, order or even a law).

The very next day after alleged implementing a road 'rule' that drivers must slow down to 40km/h when passing emergency vehicles a collision occurred on the Western Highway.

So how is that for "peace, order, and good government"?

Failure to abide by these road rules apparently carries a fine.

It seems like it's a cash grab from the struggling population.

See article from 12th of July 2017 by the Fairfax publication of the headline:

The changes to the road rules you might not know about

For the first time in eight years, Victoria has a new set of road rules.

And while most of the do's and don'ts remain the same, there have been a few nips, tucks and tweaks.

Some of the changes have been widely publicised, such as the 40km/h speed limit for driving past emergency vehicles and the new $476 on-the-spot fine for cyclists who use a mobile phone while riding.

Other alterations are a little harder to spot.

At 547 pages long, the full book of traffic regulations is a hefty read. However, the eager beavers at the RACV have helpfully gone through all 408 rules to find what others might have missed.

Here's what they found:

As mentioned earlier, bicycle riders and those mounted astride a wheeled recreational device (such as a skateboard or scooter) are now not allowed to use a mobile phone.

This rule even applies when the bike/device is "stationary but not parked".

That point has prompted riders to get in touch with the RACV to ask how they can be sure they have parked their bike, scooter or skateboard under the new rule.

"If they're standing with one foot on the skateboard are they riding it or is it parked?," said RACV roads and traffic manager Dave Jones.

"People are asking these questions, they don't want to be booked."

For cars, a recent clause clarifying that drivers could use their mobile phone with their keys in the ignition or the vehicle running if it was legally parked has been removed.

The RACV got in touch with VicRoads to clarify the situation and was told it was a mistake which would be corrected as soon as possible.

Motorcycle riders are now allowed to move their bike without a helmet, as long as the engine is off or they are pushing it.

The rule states that it has to be safe in the circumstances not to wear a helmet.

A modification to this rule makes it legal for riders to stretch their legs.

It's now legal to stand up on a bike while it's moving, as long as both feet are on the foot pegs.

Riders can also lift one leg up, as long as their bum remains on the seat.

The previous version of this rule didn't require courier or delivery vehicles to be dropping off or picking up goods while parked in a loading zone.

Now they have to, which is bad news for the lovers of a loophole who had a magnetised "courier" sign ready to stick on their car door.

A plus for food safety as refrigerated trucks are now permitted to be left running while unattended.
Road Rule 154 - Bus lanes

Bike riders are now allowed to use bus lanes, as are the drivers of private coaches. Previously they were solely for public buses.

More broadly, Mr Jones said that it was important for the state government to introduce a mandatory minimum consultation period for any changes to the road rules.

He said this would help, particularly in situations such as the 40km/h emergency vehicle rule or the mistake regarding use of mobile phones while parked.

"The public should be notified of changes in advance for education purposes but also so we have the opportunity to consider the rule," he said.