It seems there are no boundaries when it comes to the monitoring of the corporate slaves or the inhabitants of a penal colony.

Not too long ago the people have been told that Centrelink hacks into their phones;
http://corpau.blogspot.com.au/2017/07/centrelink-hacks-your-smart-phone.html

Now, even a non legal entity in Australia can (legally?) hack into your phone?

The Australian Tax Office is involved in developing / using software to ILLEGALLY hack into your phone.


Many people may not even contemplate the nefarious reason why Australia's authorities are pushing / mandating people to use smart phones in their communications.

Because they are easily hackable.

It is truly a shame that the herd population are not only compliant, but so eagerly possessing smartphones in order to be monitored, which also includes in their own private dwelling.

We do not recommend the use of smart phones (in particular Android / Apple) for communications purposes.


A NEW crisis is engulfing the Australian Taxation Office, just weeks after police smashed an alleged $144m fraud and a big computer systems outage.
ATO leaders have been forced to speak with a staff member after it emerged they has published a step-by-step guide to hack mobile phones online, revealing fraud investigation tactics.
The post was published on LinkedIn, and revealed how to bypass passwords, and retrieve data — even when the phone is flat or without a SIM card installed, the ABC reported.
The post was removed in under an hour after the Australian Taxation Office was alerted to it. It also included claims the staff member was involved in developing security capabilities it has previously not been thought to be involved in.
An ATO spokeswoman told the ABC the staff member had been spoken to but not suspended or fired. News.com.au has contacted the ATO for comment.
Phones were only accessed under a warrant under the Crimes Act, or with written consent from the owner, she said, but declined to say what “tools” the agency used as part of its work.
“For operational reasons, we do not disclose information about when different tools are used as part of our operations,” she said. 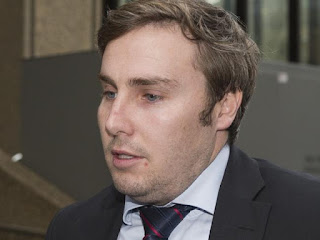 Adam Cranston’s case is due back in court today. Picture: AAPSource:AAP
Michael Cranston resigned as deputy commissioner of the ATO after his son Adam and daughter Lauren were among nine people charged over an alleged $144 million tax-evasion scheme. There is no suggestion Michael Cranston, 57, was part of the scheme, but he has been charged with using information and exercising his influence as a public officer to benefit his son.
Adam Cranston lived a lavish lifestyle until his arrest, with authorities seizing some of his assets under proceeds of crime laws. Last week it was revealed he spent $200,000 on two Italian racing cars just weeks before he was arrested.
The ATO has defended its ability to deliver during the peak tax return period after a big systems outage.
ATO portals, my Tax and other online services went down as staff attempted to resolve “some intermittent system issues”. The website has been dogged by system issues in recent months, with major outages in December, February and as recently as last week.
The problems were not related to recent hardware issues and no data had been lost, it said, nor were the systems compromised or subject to a cyber attack. “We identified intermittent system issues early this afternoon affecting our mainframe and impacting on our services to the community,” the ATO said in a statement.
“This was caused by applications running incorrectly.”