Scientology the billion dollar business abusing people, destroying families with full support of the US government?

Scams come in all shapes and sizes and in many different formats.

In the modern era, they can be from simple text messages purporting to be from a bank, pointing to a malicious website to businesses specifically designed to rob their 'customers' the likes of sophisticated ponzi schemes.

One of the greatest scams of the 20th Century was a business idea concocted by a Lafayette Ron Hubbard called Scientology, where the problem of its abused 'customers' is that it got full support of the United States government.

The tax dodging premise of the business called Scientology got its approval when the US government acknowledged it as a 'church' in October 1993.

Since Lafayette was a so called 'science fiction' writer, by the same token a group of like-minded people sympathetic to Gene Roddenberry should be able to call their business a church. 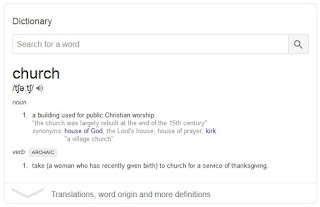 The literal meaning of the word church is that of a building used for public Christian worship, where the business called Scientology is promoting false advertising, as it calls itself a church or 'Church of Scientology' where there are no actual ties to Christianity.

As governments and war machines (an implication may be that the two mentioned entities are not the same) alike have known for millennia strength is in unity, where a healthy society has its roots in a strong healthy family unit.

Religions stemming from that cheeky fella called Abraham, together with other ancient beliefs from other cultures focus on a healthy family unit, whereas the business called Scientology does the exact opposite.

Mental, emotional, physical and financial abuse is common practice within Scientology, as reported by 'whistleblowers' Leah Remini and Mike Rinder, in their exposé Scientology and the aftermath, released in Nov 2016, aired on Australian television in Feb 2019.

The problem there for the victims within the business called Scientology, is that it's supported by the US government with little / not enough law suits or criminal charges brought forward, where in Australia, this kind of action would warrant something is called a royal commission.

What's worse is that the business called Scientology falsified official US military documents to further the false narrative of Lafayette's service, where the US government has not taken any action against this fraud, therefore indicating to its citizens that it supports this kind of behaviour.