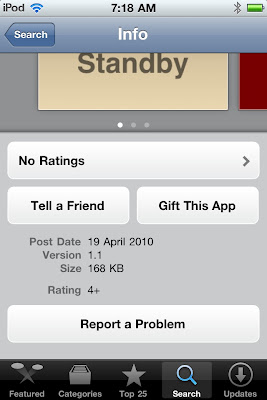 Another consumer fraud, bought to you by Apple, this time in the form its ratings system.

Applications (or programs) are bought online via Apple's "App Store" and can be downloaded to the device via a personal computer or the device itself (for example an iPod or iPhone).

Each application can be rated by users, so that others can gauge whether the product is worthwhile or not.

The ratings appear as stars, where one star indicates poor performance of an application and there can be a maximum of 5 stars.

In the illustrated example, a program has not yet been rated by users, yet has a rating of 4+.

The information given by Apple is falsified.

In Australia, it is illegal to provide deceptive information or false advertising of a product.

Obtaining revenue from false or deceptive advertising is considered fraud.

A top Australian legal firm, that declined to be named publicly, confirmed that this practice is fraudulent.

A quick scan through the various legal law list also shows that there has been no action taken against Apple for the type of fraud.

Apple obtains revenue to the tune of 30% profit from each program sold from its App Store and iTunes Stores.

At this point in time Apple is touted as the most valuable company in the United States.

As a general rule, global corporations are exempt from the same laws that are used to punish the masses.

In Australia, many lawsuits are sorted out behind the closed doors of the masonic brotherhood's member's lodge. If the agreements cannot be made, they are then 'fought' in the public arena of the legal system.