Muesli not necessarily a healthy choice 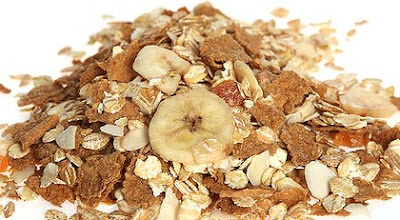 Before tucking into your morning muesli be warned, you may be about to eat more fat than there is in a McDonald's Double Quarter Pounder, Choice says.

The consumer organisation tested 159 types of muesli and discovered that the popular breakfast meal isn't necessarily a healthy choice.

"Whilst much of the fat content in muesli is the 'good' unsaturated type, coming from oats, seeds and nuts, the high fat varieties can still pack a high number of kilojoules," Choice spokeswoman Ingrid Just said today.

One brand, The Muesli, contains twice as much fat as a McDonald's Double Quarter Pounder, Choice said.

"If you are eating muesli to try and lose weight then the overall fat and sugar content needs to be taken into consideration," Ms Just said.

Choice has called for traffic light colour labelling on all mueslis that make nutrition or health claims, which would rate fat, fibre, energy and sugar content.

"The most common are gluten-free and wheat-free claims or relate to fibre and or wholegrain content," the report says.

The problem, the report says, is that nutrition claims don't tell the whole story.

"Morpeth Sourdough Muesli Delux says it has 'no added sugar' but its dried fruit content and added honey result in a product that's almost 28 per cent sugar," Ms Just said.

When out shopping, Choice suggests you check the nutritional information panel and the ingredients list for added sugars such as honey or glucose.

The full report is on www.choice.com.au/muesli.

For years the public have been deceived by the fraudulent claims of the museli manufacturers, and again in support of corporate fraud, there has been no class cation lawsuits taken against these companies.

There is a general policy for the cronies of law, politics and business not to appear before the courts against each other.

If there are the ones who break the mold, the cases are usually dismissed, and plausible reasons given in case of any inquiry.