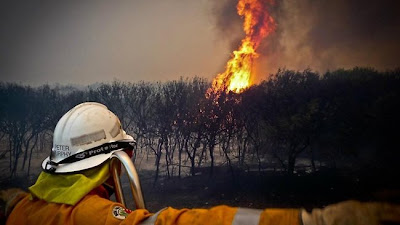 UPDATE 4.20pm: Insurers estimate the damage from the bushfires in Western Australia's Margaret River region will be in the tens of millions of dollars.

Insurance Council of Australia chief executive Rob Whelan said the industry was encouraged that the fires had been brought under control.

"We're still getting a picture of the extent of the damage but very early estimates put the damage in the tens of millions of dollars," Mr Whelan said in a statement on Monday.

Mr Whelan said the council had sent a senior manager to the area to work closely with state and local government authorities as the recovery process commenced.

Thee bushfire has been declared a natural disaster, triggering extra funding from the state and federal governments.

About 40 firefighters continued mopping up around the fire on Monday but it is no longer considered a threat to lives or properties, after destroying 32 homes on Wednesday and Thursday.

Hundreds of residents have returned to their homes after evacuating when a prescribed burn in a national park escaped and tore into bushy subdivisions.

The West Australian government is copping flak over the fire, which was started by the Department of Environment and Conservation (DEC) in September and reignited on Monday last week.

The state opposition has called for Environment Minister Bill Marmion to be sacked but Premier Colin Barnett says the fire was an accident and blame should not be laid.

Mr Barnett declared the fire a state natural disaster on Monday, which means recovery grants of up to $15,000 can go to primary producers and small businesses who suffered loss.

He said he had written to Prime Minister Julia Gillard seeking agreement to implement the grants, with equal contributions from the WA and federal governments.

The WA government has already announced that families who lost houses can get $3000 emergency assistance grants, while those whose houses suffered damage can get $1000.

Mr Barnett said his sympathies went out to those who had lost their homes and he thanked firefighters for their efforts in saving so many houses.

DEC's Director-General Keiran McNamara has defended the burn, saying unseasonal wet weather prevented it being completed in the time expected but it needed to be reignited to ensure it burnt out.

The DEC says 32 houses, nine holiday chalets and five sheds were lost in the blaze, while 22 houses and a shop were damaged at Prevelly, Gnarabup and Redgate.

Wallcliffe House, an 1865 riverside manor being restored by Woodside Petroleum and National Australia Bank chairman Michael Chaney, was one of the houses destroyed by the fire.

A bushfire that was man made, became out of control, i.e. project failure, as a result of a burning off operation by the authorities.

A bureaucratic loophole to cheat victims out of compensation?