IN AN extraordinary and rare display of straight talking, the NBN Co chief executive, Mike Quigley, says he donated his entire first-year pay cheque of almost $2 million to charity to wriggle out of a tight political corner. 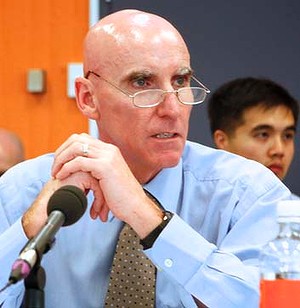 The communications boss, who survived a life-threatening battle with leukaemia in the 1990s, said of the donation at the time: ''I'm in the fortunate position where I can afford to give away my first year's salary. When you have a life-threatening disease, it has an impact on how you view things and you find out what is really important in life, and it's made me realise that we are all lucky or unlucky.''

But the warm glow of charitable giving was absent when Mr Quigley took part in a ''meet the CEO'' forum hosted by the BRW and University of New South Wales.


In response to a question about the sizeable gift, Mr Quigley admitted that rather than an act of benevolence, ''that was to solve a problem with Senate estimates''.

The comment drew laughter from the crowd but the facts bear out Mr Quigley's candid statement with the opposition doggedly persistent to uncover what it claims are blowouts in costs of the NBN, which is now running a year behind schedule.

In Australia, charity donations are tax deductible, therefore any donation given by a large corporation can be recouped via tax and the so called noble gesture is thrown out the window.

The government has procured the NBN in a 'Money for Mates' deal that has ballooned out to nearly $45 billion dollars on a fraudulent scale that the corporate media will never report on.

The government's touted (propaganda) advertisements of the NBN's promised 100Mbps speeds are already offered to customers via cable.

The NBN is of of the largest smoke screens to implement hardware and technology for not only internet censorship but also gathering and storage facilities to collect data on every single Australian citizen, whether on the internet or not.

There is a reason for the secrecy and lack of disclosure of details of the NBN project.
In American terms it is called a "Black Budget".