iMessage not working this morning?

iPhone users the world over were affected by some downtime today which resulted in them being unable to send their text messages via iMessage, Apple's instant messenger service which sends text messages for free. 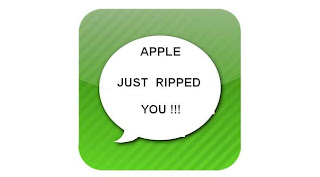 Messages were, however, able to be sent via SMS — but some were unhappy with this and complained that even though they turned off sending their messages as an SMS their text was sent as one, costing them money.

Contacted for comment, an Australian Apple spokeswoman said that their iMessage had not encountered any issues this morning, despite numerous blogs saying that their users had reported issues.

Apple's own website also had users reporting issues, but now most of those users say the problem appears to have been fixed.

Technology companies work together with telecommunications companies, which is no secret  within the industry nor to the general public.

Fraud and theft can occur in many formats, from petty crime of stealing from a (retail) business, to high end banking crimes of stealing monies from customers.

If Mr. Joe Average walks into a retail premises and steals a paperclip, the proprietor has the right to charge the individual with the crime of theft.

In this case Apple 'stole' monies from their users passing on the profits to the telecommunications companies fraudulently.

An agreement was made between the customer and Apple, that a service of SMS via the GSM netowrk was not to be used, which Apple broke.

This deed can warrant a class action lawsuit against Apple.