GENTLEMEN'S agreements, side deals, "understandings" and secret extra to contracts are rife within the AFL, senior figures told the Sunday Mail. 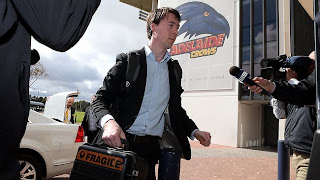 The key is to keep it vague and not put anything in writing.

The administrators, who spoke on the condition of anonymity, said it was common for clubs to agree that they would endeavour to help a player move back to his home state at the end of his contract - should he so desire.

Clubs also made assertions they would help out with the players' leadership training, work outside of the game and other similar incentives that could sway them to remain with the club.

The main thing was not to put it in writing.

A senior figure at one club said another key was to promise to try, and mean it, but that it was fraught with danger to guarantee an outcome that could ultimately be out of the club's control.
The greatest fear was the "please explain" letters from Ken Wood, the AFL's chief investigator, which often ended with the phrase: "Please respond in writing by (a certain date)."

"When that happens, you've got nowhere to hide," the official said.

It was this scenario, well known to clubs, that had clubs baffled over the Kurt Tippett scandal.

Had the league acted sooner on the widespread speculation of an "exit clause" for Tippett with one of the "please explain" letters, the affair could have been closed before the Crows' confession brought it to a head - when there were only days left in the trade period.

AFL formerly known as VFL (Victorian Football League) was created to keep to low educated masses, a fair percentage of the populous, entertained on the weekends. This fact is well documented in Australian history.

This 'bogan' sport has become an Australian institution, and any diss-assembly of it will not be allowed by the ruling elite.

Not only corporate fraud is an issue, but also drug consumption is rife, and ignored by authorities.

Drug dealers 'slip' past the system as authorities turn a blind eye into the narcotics trade in sport.

The general populous when apprehended with a quantity of drugs are dealt with accordingly by the law, whereas sports 'stars' not only flaunt drug use, but have no legal consequences against them.

Another corrupt arm of politics at play.