CASEY chief Mike Tyler should stand down to face court over conflict of interest charges that follow a harassment case, a local MP says. 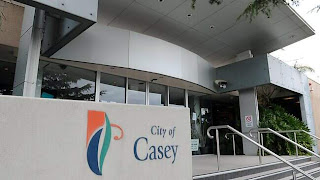 Casey Council chief executive Mike Tyler was charged with two counts of breaching the Local Government Act for allegedly failing to notify the mayor and council of a conflict of interest in a matter he had authority over, a statement from the Local Government Investigations and Compliance Inspectorate said.

"It is alleged that as a consequence of the breach Mr Tyler then committed council resources and funds on a matter in which he had a personal interest, without notifying the mayor or council as required under the legislation," the statement said.

Narre Warren North Labor MP Luke Donnellan said Mr Tyler should volunteer to step down “for the good of the community”.


“I think, due to the seriousness of the charges, he should stand down, in the same way (Federal MP) Peter Slipper stepped down from the Speaker’s role.

“It’s obviously up to the councillors to make that decision and ask him to step aside until the end of the proceedings.”

Mr Donnellan said the council should not use ratepayers funds to defend Mr Tyler in court.

Casey Mayor Amanda Stapledon said Mr Tyler had not been stood down and the council would not take action until the court had made its decision.

"Council will consider the outcomes of the court process before deciding on future action in relation to this matter," Ms Stapledon said.

“Mr Tyler is entitled to due process, and until the matter concludes, it is inappropriate for Council to make any further comment,” Ms Stapledon said in a statement.

“Council will not be funding Mr Tyler’s defence. Once the matter is finalised, Council will advise residents of the outcome.”

The charges stem from a secret out-of-court settlement with a single mother of two who had sued the council for sexual harassment.

The woman claimed Mr Tyler had bombarded her with "unwanted attention", causing "high levels of anxiety and stress", which resulted in her requiring medical treatment.

The July 2010 claim lodged in the Victorian Civil and Administrative Tribunal alleged Mr Tyler had harassed the woman with text messages and late-night phone calls, and turned up uninvited at her house.

The council has refused to detail what amount of ratepayers' money was used in the settlement of the claim.
Casey Councillor Wayne Smith said Mr Tyler should not be stood down during the court case.

“We’ve known about it all along that it (Mr Tyler facing charges) was likely to happen,” Cr Smith said.

More corruption and fraud from 'government'.

In Australia, governments are literally the most corrupt organisations.

It is a system where a joint brotherhood takes control of public finances and distributes the wealth exclusively amongst themselves.