NICHOLAS Zisti thought he'd get into the Australia Day spirit by decorating the family cafe in patriotic colours - so the City of Sydney hit him with $5000 in fines. 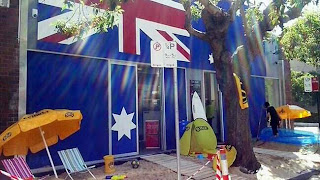 Mr Zisti organised a beach barbecue complete with sand, surfboard and a massive Australian flag printed on plywood panels, which were affixed to the Alexandria shopfront around the January long weekend.

The council decreed he should have lodged a development application first.

"For our contribution to Australia Day the council have given us $5000 worth of fines," Mr Zisti said. "I registered the event on the Australia Day Council of New South Wales website, and the City of Sydney council website as a free event. I did all the right things.

"The business next door builds stages and sets and did the work (for us) on separate sheets of plywood, which was easily attached and detached with screws without causing any permanent or even cosmetic damage. They were incredibly secure."

WHEN the famous Annandale Hotel was fighting to keep its head above water, then councillor Jamie Parker voted to continue legal action that contributed to it going bankrupt.
THE owners of a live-music themed bar are worried they will be closed down after a series of noise complaints from Greens Senator Lee Rhiannon.
Mr Zisti and his mother, who owns Alexandria Food, got a $3000 fine for not getting development consent for the Australian flag-themed sign. They were also fined for obstructing the footpath and "water pollution". 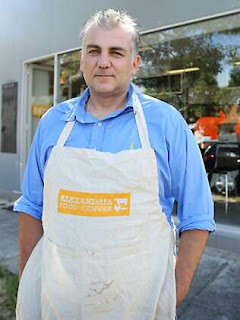 "I can't believe we had to have a development consent for a temporary decoration. To be honest I didn't think we needed one," he said. "I'm too scared to put up Xmas decorations now. But I am fighting these fines - it's like being fined for being Australian.'

"Council officers said some sand had got into the stormwater (drain) and they would have to get a team in to clean it up and charge me. I said 'fair enough', even though I had put down special mesh designed to keep the sand out of the drain."

City of Sydney said the sign was vulnerable to wind and a risk to the public.

"If the sign fell or was blown off it could have seriously injured a member of the public.

"It is an offence under NSW law to display signs that do not have development consent because they may not be structurally sound," a spokesperson said, adding some of the sand was in stormwater drains.

"We advocate the removal of regulatory burdens which act as impediments to growth and customer service; and good on retailers for supporting Australia Day," Mr Zimmerman said.

Another illegal act carried out by a fraudulent city council.

The Australian populous are being duped by city councils 'powers' to 'fine'.

City councils are registered Australian businesses, and thus not part of any 'legal' governing body, as portrayed

The criminal in the case it the city council.

Some comments from the article:

If he put a muslim flag or chinese flag he would not have been fined.

Des of Alexandria Posted at 8:54 AM Today

Yet another reason why local government is a waste of space and should be abolished.

Get used to it because this is exactly what green governments do strip you of your freedoms whilst empowering themselves to rule at the expense of ordinary people, disgusting Clover More. You can paint a gay crossing for a parade, but not a flag for Australia day speaks volumes doesn't it?