Victorian police have launched an internal blitz to find rats in the ranks after claims that outlaw bikies have infiltrated the force. 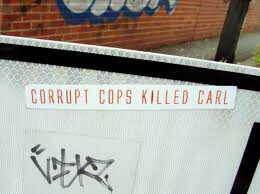 It said the links have compromised the safety of undercover officers and informers and jeopardised investigations, including two major probes into Malkoun.

Fairfax says separate investigations by several law agencies have uncovered at least a dozen police who are suspected of having inappropriate links to bikies.

It says Mitchell, who was shot outside a Brunswick gym in 2011, has communicated with a Victorian police officer many times in the past two years.

It is understood that the officer has also been accused of withholding information from police about who was behind the attempted underworld hit on Mitchell.

Fairfax says the officer was recently suspended from the force and charged in connection to allegations he bought illegal steroids from a Mitchell associate.

It said Malkoun has socialised with Victorian policemen since 2010, inviting up to three officers to his Crown casino wedding, and attended a christening with two officers at a Greek restaurant.

Chief Commissioner Ken Lay told The Age police have information that a small number of officers have links with outlaw motorcycle members, amphetamines and performance-enhancing drugs.

In a statement, Mr Lay said it was a significant concern that outlaw motorcycle gangs were trying to corrupt police members.

"This will not be tolerated," Mr Lay said.

"We have introduced a number of improvements aimed at safeguarding police members from the risk of corruption, and rooting it out where it exists."

He said Task Force Eagle had been set up within the Professional Standards Command (formerly Ethical Standards Department) to uncover corrupt cops.

Bikie gangs had a clear interest in cultivating police contacts so that they could be compromised and coerced into providing information, he said.

"We are sending a clear warning to police members that they need to be alive to the threats at all times and complying with internal policies designed to protect them and the organisation," Mr Lay said.

A total farce in front of the herd population.

It is a well known fact that Victoria's police is one of the country's most corrupt police force.

Police work together with crime syndicates allowing them to amass fortunes, immune from prosecution or confiscation of tens of properties obtained from the proceeds of crime.

The real figure is more like a couple of  (corrupt) cops, per police station.

The Australian Tax Office is also part of the corruption.