Julia Gillard, Australia's first female Prime Minister, will go down in history for a few feats. 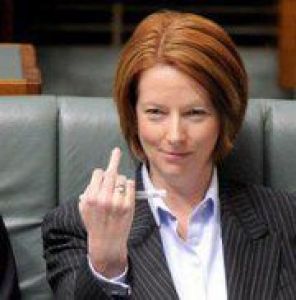 It's not just the fact that she's female that she has gained notoriety, but also the fact the people did NOT elect her as PM, that she sat in office.

It is not the fact that prior to her seat as the 'CEO' of Australia, she stated that the 'Carbon Tax' will not be implemented, but it did soon after her 'election'.

A well known fact within her office is that of her sexual orientation, that being not of the heterosexual persuasion, which may or may not be relevant to some people.

Arguably the most deceitful and hated PM in Australia's living history.

What is the most scandalous support of criminal activity by the 'authorities' is the farce around Gillard's criminal history, and the lack of any further charges against her.

With total support of the corporate media to keep a lid on the fraud committed by Gillard, signifies how in bed with the dirty government the media really is.

Gillard is part of the corporate elite who are above the law, and cannot and will not be ever touched.

The lack of any further investigation into the criminal activities, and subsequent sentencing is support of this fact.

At the top level of politics, the secrets of government are unveiled to the privy few.

The above illustration of Gillard depicts what she thinks of the Australian herd population, and the so called 'law' that the plebs MUST abied by.

A communist dictator on the shores of Australia, what an achievement!